Gynecomastia means enlargement of the male breast. The definition has nothing to do with what causes the enlargement or what tissue it is composed of. It is most common around puberty & can involve one or both sides of the chest. Most commonly the enlargement is centralized in the breast but occasionally it is not. It is present to some degree in about a third of male population. It appears either early in adolescence or later in the adult years of life and can be very disruptive in the life of a teenager or adult. Working out in the gym, going to the beach and changing in the locker room can become unpleasant ordeals.

The causes can be classified as:

The majority of cases are physiological or drug induced. Evaluation
by a qualified physician is required to see which category you fall into.
The treatment of the physiological category is straightforward while the
pathological is more complicated. Drug induced gynecomastia just requires
stopping use of the drug. If the gynecomastia is resistant to treatment
or is the adolescent type but persistent surgery is required. Gynecomastia arising before the onset of puberty requires a vigorous diagnostic workup because of the possibility of life threatening or shortening pathology.Grades of Gynecomastia
The specific surgery required for treatment depends on the type of tissue contributing to the breast enlargement and the severity of gynecomastia i.e. the amount of extra skin present. Gynecomastia is graded as follows: 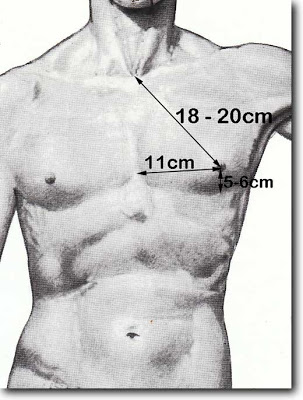 The way to assess the amount of excess skin is to take the measurements depicted above. The sternal notch to nipple distance should be 18 to 20cm, the midline to nipple distance should be 11cm, areola diameter should be 3cm and the nipple to chest abdomen junction should be 5 to 6 cm apart. Deviations from these measurements should be taken into account when planning the pattern of skin removal that needs to be removed at surgery. In most patients with extra skin the breast tissue has stretched the overlying skin, gravity pulls it downward and the treatment is simple removal of a crescent of skin above the areola. Some surgeons believe that the skin will shrink after removal of the underlying breast tissue and therefore never remove any skin. Although this may be true for patients in their early teens I do not believe that is the case for adult patients past that age. In my experience these patients are very unhappy if excess skin when present is not addressed at the same surgery.

After liposuction and rhinoplasty, gynecomastia surgery is the third most common cosmetic surgery procedure performed on men in the United States. 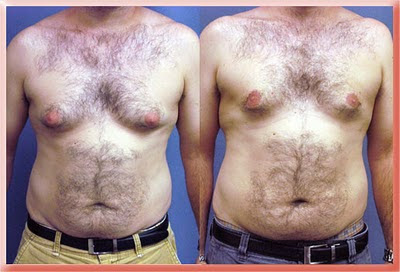 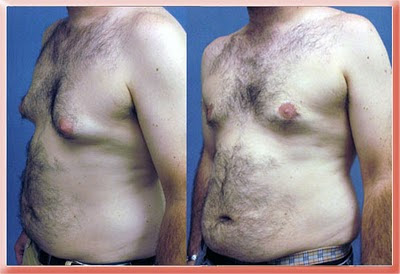 This is a 29 year old, 5′ 11″ tall, 186 pound indvidual with sternal notch to nipple distances of 23cm and nipples 11cm from the midline. These measurements indicate that there was excess skin before surgery. I performed liposuction to remove the fat portions, directly cut out the glandular portions behind the nipples and then cut out 2cm high crescents of skin from just above the areola. I chose that method to get the most results with the smallest amount of skin incisions. 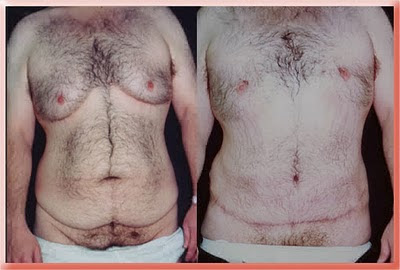 This is a 29 year old, 5’10” 220 pound individual who had lost 130 pounds by dieting. This left him with a lot of excess skin over large areas of the body. In this case I cut out the excess fat and removed a 1cm crescent of skin from the upper edge of the areola. He had an abdominoplasty – tummy tuck at the same time and I was able to pull some chest skin down towards the abdomen in the process which gave him more chest skin tightening with less chest skin scarring. 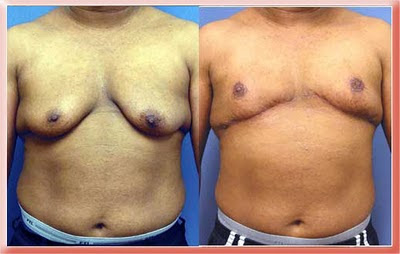 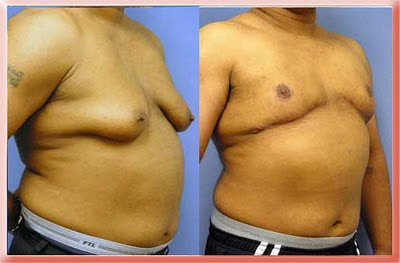 This is a 33 year old individual with feminizing features. The sternal notch to nipple distance was 21.5cm on the right and 22cm on the left, midline to nipple distance was 8cm and areola diameter was 4cm. This case is clearly more severe than the others and in order to achieve a male appearance the nipples have to be shortened, the areola diameter decreased and extra skin and breast tissue removed. I did so by removing an ellipse of skin with underlying breast tissue. The upper edge of the ellipse lied above the areola while the lower edge was at the chest-abdomen junction. I then sutured the edges together and created a new smaller hole for nipple and areola in a better position on the chest wall.


January, 25, 2012 Addendum:
The Wachbataillon unit of the German army performs precision military drills at official ceremonial functions. Many of these drills involve smacking rifles against the left side of the soldiers’ chests. In a study of the German soldiers a significant difference was found between the guards in this unit with gynecomastia and a control group of healthy males without signs of gynecomastia. Over 70 percent of the German battalion’s soldiers have been diagnosed with significant gynecomastia on the left side. All that pounding on the same spot has stimulated the production of hormones that cause breast growth. Maybe there is something to slapping your way to larger breasts.