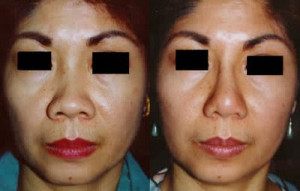 Non-surgical rhinoplasty has been around since the early 1900’s when surgeons used liquid paraffin to correct nasal imbalances. Although the corrections proved effective, the paraffin wound up being harmful to the body. As were the silicone fillers of the 1960’s. It’s only recently with the advent of hyaluronic acid fillers such as Voluma, Belotero, Juvederm and Restylane that the non-surgical rhinoplasty has become a plausible reality.
This month an article published in Dermatologic Surgery and another in Aesthetic Surgery Journal tout the benefits of non-surgical rhinoplasty with injection of a hyaluronate filler into the nose. The first out of a South Korean clinic used the filler to augment the bridge and/or rotate the tip with a 1% rate of vascular complications. Those cases were attributed to the use of a needle instead of a cannula but they did prove the efficacy of the procedure. The second looked at Asian patients in Australia and Brazil undergoing the procedure and reported that nearly 80% were satisfied or very satisfied with the filler treatment 12 months out. 85 to 90% said they would recommend the procedures to others. It is not clear which hyaluronate is best for this procedure or if other types of fillers can/should be used.

The take home message is non-surgical filler rhinoplasty can produce temporary results that are comparable to surgical augmentation rhinoplasty. However, the key word is temporary and this is likely best used on the bridge below the radix level or injected from below upwards. Injections directly into the radix near the eyebrow level, in the tip or on the sides/creases of the nose where the blood vessels are is more likely to result in vascular complications i.e. skin and possibly deeper tissue loss. The material can cause a problem by being injected directly into an artery or vein or by compressing a blood vessel by mass effect. Some fillers absorb water over time like a sponge so their compressive effect is delayed. There is a remote chance the injected material migrates to the eye causing blindness. If you have increasing intolerable pain after these injections you may have impending skin loss and need to be treated within 24 hours. The best way to avoid a complication is to not inject directly into the areas described above, make a skin hole with a small 22G needle near the midline and then inject through this hole with a 25G blunt tipped cannula. Some doctors mix the hyaluronate with local anesthetic to thin it and make it less likely to adversely affect blood vessels.

The best candidates for this procedure are those with deficient nasal bridges and thick nasal skin (like Asians), those who cannot undergo the down time associated with surgery, those who are prone to or afraid of complications like scar contracture or thinning of the nasal tip and those who cannot afford surgery or want to try out the surgical result before committing to surgery. You of course cannot refine the nasal tip, fix valve collapse, narrow a boxy tip, decrease tip projection, change columellar show or narrow the alar base by just injecting filler. Non-surgical filler rhinoplasty has a role but it cannot replace rhinoplasty surgery.

After Massive Weight LossCare After SurgeryOnline Physician Rating and Ranking Servic...Treatment of Scars, Moles, Age SpotsVitamin B3 Prevents Skin CancerControlling Pain After Cosmetic SurgeryRedo NeckGenital Cosmetic Surgery - Designer VaginaMixed Martial Arts MMA and Plastic SurgeryThank You for Your Input
This website uses cookies to improve your experience. We'll assume you're ok with this, but you can opt-out if you wish. Cookie settingsACCEPT
Privacy & Cookies Policy