AGING PROCESS OF THE FACE & TECHNIQUES OF REJUVENATION
Beauty is a concept that is ethnically, racially and culturally determined. It has no universal criteria and varies from, culture to culture as well as from century to century. Contemporary standards, of beauty in American culture are epitomized in advertisements showing young, slender-bodied models with perfectly proportioned facial features.

Facial proportions were studied by Leonardo da Vinci. In his drawings he made portions of the face proportional to the ears, nose or eyes(Fig 1).

Fig 1. Leonardo’s measurements of the face superimposed on a tracing of a sketch by him.
(From McCarthy J.: “Introduction to Plastic Surgery” Fig. 1-21 pg.30 in Plastic Surgery McCarthy J. ed. 1990 W. B. Saunders Co. Philadelphia, PA.)

The bust of Nefretiti is considered a face of perfect female proportions (Fig. 2). 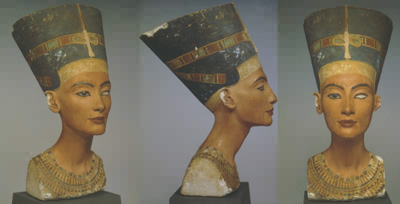 Nefretiti was the wife of Amenhotep IV who ruled Egypt from 1353 to 1336 BC. Her bust is on display at the Aegyptischer Museum in Berlin. It dates to ca. 1340 BC and was found in an excavation on the workshop of the sculptor Thutmosis. He used this bust as a model to make all other statues of the queen for display in the kingdom. On the frontal view the proportionality of alar base width (distance between the lower outer edges of the nostrils) equal to the intercanthal distance (distance between the inner and outer corners of the eye) of each eye is evident. Other noteable attributes of beauty are high cheek bones with a gentle curve or concavity to the cheek at the level of the mouth (Ogee curve) evident on the oblique view. The eyebrows gently curve upward with their hiatus at the outer edge of the iris. Their trajectory is contiguous toward the midline with the  convexity of the nasal bridge outline bilaterally. There is no brow ptosis/drooping, both eyebrows lie above the superior orbital rim (the boney rim above the eye). The nasal bridge line is parallel to the longitudinal axis of the ears. Nasal tip projection outward from the face is about 2/3 of the length of nose. The chin prominence lies just behind a tangent line drawn from the midpoint of the nasal bridge just passing the edge of the upper lip. The facial skin is smooth without crow’s feet, deep nasolabial folds, neck platysmal bands, jowls or upper/lower lid bags/wrinkles. The margin between cheek and lower eyelid is ill defined. The jawline on the other hand sharply defines the margin between neck and face. There is no white scleral show above or below the iris in the intact right eye. Important measurable angles include a lower jaw body to ramus angle of 133o, nasolabial angle of 105o and neck submental angle of 120o are also present. Evidently facial proportions and the ideal look of the youthful feminine face were known as long ago as 1300 or 1400 BC, maybe longer.

The traits described above are the ideal for the Caucasian in today’s western culture. African, Asian etc individuals have different facial traits based on ethnic/genetic differences. Despite this the presence of the traits described above are considered signs of beauty in other ethnicities as well. In today’s world mixed traits are considered highly desirable. One only has to look at the number of actresses and models with dark African skin color and Caucasian type noses, lips, etc. to see the validity of this statement.

The aging process is slow, relentless and irreversible. It occurs at different rates from individual to individual as well as in each person at any given time. Facial aging is unrelated to general physical activity unless one is very ill and bed ridden. General changes that occur with aging include:

Over time the effects of gravity and the longitudinal pull of muscles cause drooping or sagging of the skin and deeper structures of the cheeks, eyelids, nose, chin, legs etc. from areas of deeper attachment. The result is wrinkles and jowls in the face and cellulite in the extremities (Fig. 3). 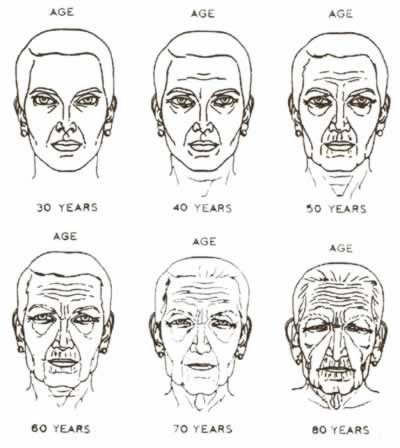 In the 30 to 40 year old age group the upper eyelids become redundant and crow’s feet appear at the outer corners of the eyes. The nasolabial folds deepen and 40% of males have some degree of hair loss.

In the 40 to 50 year old age group lower eyelid bags appear, glabellar (between the eyebrows) and forehead wrinkles appear and 25% of males are bald. The outer brows begin to droop. Cheek fat begins to descend downward towards the jawline. Women in this group lose glandular breast tissue, which may or may not be replaced by fat. Redundant neck skin begins to appear. Facial fat atrophy or wasting becomes evident with concavity of the surface contour in the temple area and cheeks appearing. In some individuals the eyes become sunken as a result of fat atrophy rather than forming eyelid bags.

In the 50 to 60 year old age group neck wrinkles, jowls (broken jawline), and marionette lines appear. More of the eyebrow droops. The nasal tip droops. The lips thin so there is less dry vermillion (pink area where lipstick is applied) showing and perioral wrinkles appear. Platysmal banding appears in the neck.

In the 60 to 70 year old age group the facial skin thins, fat atrophies in the cheek and temples and skin pigment cells increase in number and size in a blotchy pattern giving rise to brown spots of the back of hand and face (senile lentigo). 50% of males in this group are bald.

During the course of this aging process the general outline of the face changes from a triangle with the apex pointing downward or U-shaped outline to a trapezoid or rectangle due to sagging skin and downward descent of the cheek soft tissues (Fig. 4). This change in geometry is more evident in the female face. 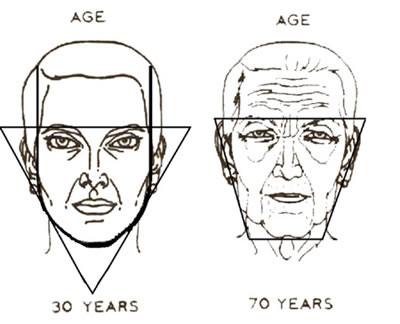 The aging process described is accelerated by:

Reversal of the aging process described is obviously much more than just pulling or tightening facial skin and removing presumably excess skin at surgery. A variety of surgical and non-surgical modalities of variable aggressiveness or severity are available to reverse or slow the progression of this aging process.

Non-surgical techniques include prophylactic measures such as the use of sun screens, avoidance of active or passive smoking, avoidance of prolonged exposure to extreme cold, wind etc, and the use of a variety of creams, ointments, or acid/fruit peels. The applied creams or peels kill or remove the outermost layer of skin (analogous to a superficial burn), after healing the remaining skin is smoother and firmer appearing more youthful and less wrinkled. Favorable changes are also seen at the microscopic level. Since the peels are designed to work on the outermost layer of skin they are most effective on adynamic wrinkles as they are directly due to aging of the skin rather than the action of deeper muscles. Dynamic wrinkles on the other hand are more amenable to botox injection as long as the wrinkles are not severe.

The peels come in a variety of types or strengths. The stronger peels affect the tissue further down from the surface and are referred to as deep peels. The weaker ones act closer to the surface hence the term light peel. Most cosmetics now contain lighter peel ingredients.

Lighter peels have short or no recovery times but may require frequent applications over 10 to 12 months to achieve the final result. Deeper peels yield a greater improvement in a shorter period of time but have an associated longer recovery period and greater risk of complication.

Possible complications of peeling include:

The first available injectable skin filling material used to treat skin wrinkles or folds was silicone, which was eventually banned because of the high complication rate. Collagen came later and then hyalurnates like restylene. Hyaluronates are currently the most popular injectable fillers in use. The hyaluronate is processed from rooster combs or is synthetically made in the lab. The injected hyaluronate can last 6 or more months but in some cases vanishes sooner. All of the injected material will eventually resorb so that 2 or 3 treatments per year are required to maintain a result.

All injectable skin fillers by their very nature can give a lumpy result which at least with bovine collagen is temporary.

Botox or botulism toxin is a compound produced by bacteria-not the bacteria themselves. Therefore it is not contagious or infectious. It temporarily paralyzes muscle beginning about 1 week after being injected into the muscle. Although the results can be dramatic they are short lived-usually around 3 months. Repeat injections are therefore required. Some individuals may build up resistance to the compound over time. There is no documentation of permanent injury to the muscle. Lastly, there are 3 forces creating facial wrinkles although some wrinkles may have more than 1 contributory force to varying degrees:

Botox only works on the muscle contribution to wrinkle formation and the more muscle action contributes to a wrinkle the more effect Botox will have, temporarily. If the wrinkle cannot be effaced with finger pressure prior to botox injection the injection will be less effective because the problem is then permanent damage to skin layers that is unaffected by muscle paralysis.

Surgical techniquesavailable can be divided into 2 groups 1)minor surgery and 2)major surgery.

Laser has taken the place of dermabrasion or chemical peel in most cases. It can be very effective in removing adynamic wrinkles as well as blotchy skin surface pigmentation (Fig. 5).

Fig. 5 Before and after treatment with CO2 laser to remove wrinkles and unveven pigmentation.

A variety of lasers are also available for the treatment of pigmented skin lesions.

Major surgery includes browlift, eyelid and nose procedures as well as facelift and liposuction. In some cases the work is performed with the aid of an endoscope so that fewer and smaller incisions can be used to perform the desired procedures or in addition to a minor surgical procedure.

Fig. 6 Before and after browlift and upper/lower eyelid surgery. Note correction of brow drooping and removal of excess eyelid skin. 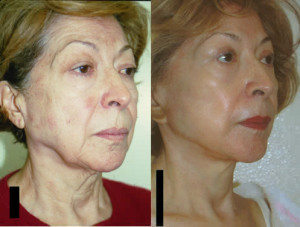 Fig. 7 Before and after facelift.

Note the softening of the nasolabial fold, correction of platysmal banding in the neck and change in the facial contour from the trapezoid shape to a more youthful U-shape. This can only be achieved by raising the deeper tissues in the cheek vertically. Attempting to do so solely via removal of cheek skin from in front of the ear can result in bad skin scars, an unnatural pulled look and failure to improve the facial contour. Closure of the skin incision around the ear in the absence of skin tension & designing this incision in the shape of an omega yield the least noticeable scar.

Call today for a consultation!