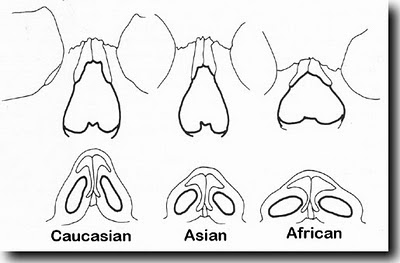 There are 3 main types of noses – Caucasian, Asian or Oriental and African. The Asian nose has characteristics between those of the Caucasian and African. Today one increasingly finds mixed features between these groups as well so some individuals can have a Caucasian tip with an African bridge or vice versa. The most visible difference is the more vertical nostril alignment with a longer strip of skin between the nostrils in the Caucasian nose vs. the Asian or African nose. The Asian and African nasal bridges are flatter and broader than the Caucasian. In some cases the bridge may be so flat that it appears scooped out or ski sloped. The nasal tip skin is usually thicker with a more rounded tip in the Asian and African noses. The thinner nasal tip skin in the Caucasian nose makes the tip cartilages and their shapes more visible on external viewing. 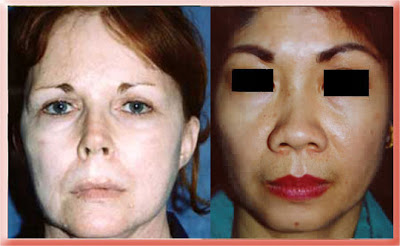 This photo shows the narrower higher bridge and less rounded tip in the Caucasian on the left. In the Asian on the right the bridge is flatter and wider and the nostrils are oriented more horizontally. Consequently the tip of the nose does not project outward as much from the face as in the Caucasian. If you examine the Asian nose closely you will see that the deficit in forward projection of the nasal bridge bones is greater than that of the bridge cartilages. 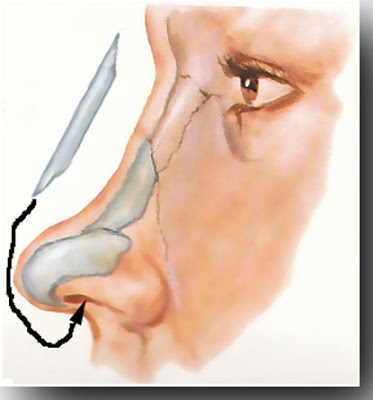 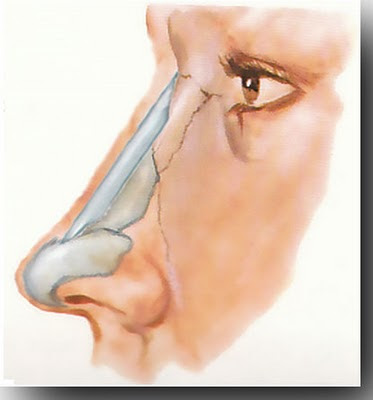 Implant Augmentation of the Nasal Bridge
The most common part of Asian rhinoplasty or AfroAmerican rhinoplasty is insertion of an implant or cartilage graft to augment the bridge. This is depicted in the above diagrams. Since the bridge nasal bone deficit is usually greater than the bridge cartilage defect (the cartilage usually projects 2 or 3mm more outward/forward than the bone) I place an implant that is double thickness over the bone portion and single thickness over the cartilage portion. The only other option would be to cut back the cartilage to the level of the bone before placing the implant. I do not like that approach because it creates an irreversible situation should the patient have a future change of heart/mind. Augmenting the bridge will indirectly change the nostril orientation making it more vertical as in the Caucasian nose in the first diagram in this blog.

The tip procedures performed at the same operation are highly variable from patient to patient because of the variances in how they want the tip to look.

Suture Shaping of the Tip of the Nose
Most commonly the tip cartilages are advanced forward and sutured together (re-furled) in order to make the nostrils more vertical and increase forward projection of the tip.

Infracture, Tip Surgery & Tip GraftingAdditional procedures performed are depicted here. On the left the broken black lines above the tip represent the infracture performed under the skin to narrow the bridge. The broken black line in the nostrils signifies where tissue is removed to narrow the distance between the outer edges of the nostrils when they appear flared before surgery. And the broken line on the tip cartilages represents where cartilage is removed in order to refine and raise the tip. This gives the final result in the middle. If the patient then wants a less round or more Romanesque look tip cartilage or synthetic grafts are placed on the dome of the tip (depicted here in grey). 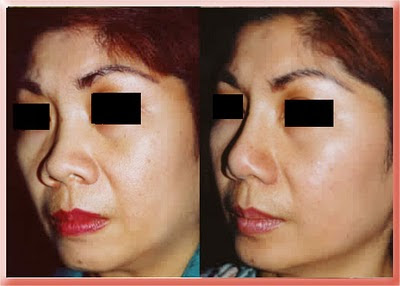 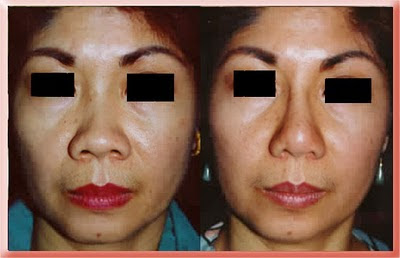 For this patient I sutured the tip cartilages together advancing the tip forward 4mm. I removed 4mm from bottom of each nostril to narrow the outer nostril edge to outer nostril edge distance and reduce the nostril flaring. The bones were infractured to narrow the bridge width and a medpor implant was placed on top of the bridge. As described above the implant was double thickness over the bone part of the bridge. Additionally I placed a batton between the septum and the tip cartilages to correct the retruded strip of skin between the nostrils. A tip graft was not placed because this patient wanted to keep her ethnic round tip appearance. 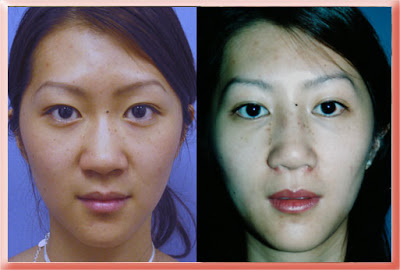 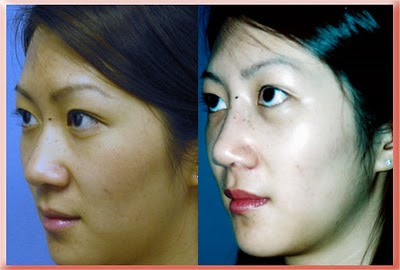 For this patient I removed the upper part of the tip cartilages so the tip would rotate upward slightly, advanced (re-furled) the tip cartilages 3.5mm, removed 3mm from the bottom of each nostril, infractured the nasal bones, placed a synthetic bridge graft (double thickness over the bone portion) and placed a tip graft of medpor. The tip graft was placed to make the tip less round and forward project the tip a few millimeters.

As you can see from the before and after photos this surgical regimen allowed us to meet the desired goals. The after photos were taken shortly after surgery so there is still some significant swelling.