In the young individual the transition between lower eyelid and cheek is imperceptible. The dividing line between these areas in older individuals is the nasojugal crease also called the nasojugal groove (term first used in 1961) or tear trough (term first used in 1969). It is an early sign of aging around the eyes, lending a fatigued and aged appearance to the face. As part of the aging process ligaments that fix facial skin to the underlying facial bones thin and lengthen or stretch, facial bones recede back and facial fat shrinks. This results in the drooping of facial skin and appearance of laugh lines, jowls, nasojugal creases, eyelid bags etc.. The skin within the nasojugal groove or crease becomes thinner and/or darker in color than the slightly lower nose or cheek skin. It can also seem deeper or be more visible if there is protrusion of fat into the lower eyelid. The aging process starts near the nose as the tear trough and progresses outwardly towards the same side ear becoming what is called the palpebromalar groove. 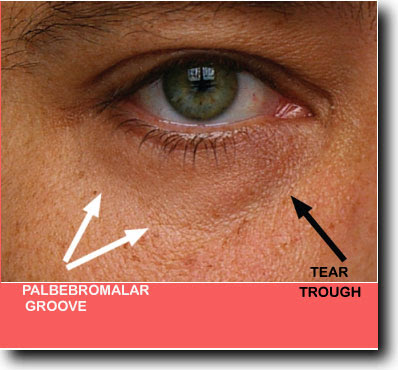 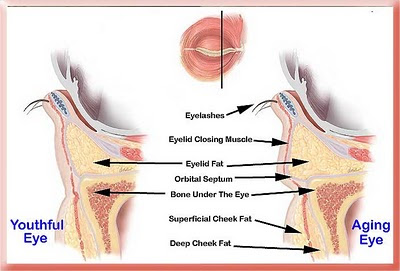 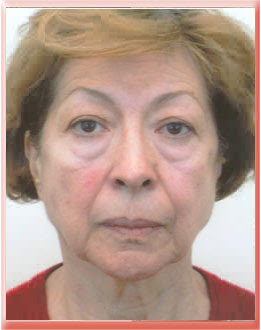 Plastic surgeons treat the nasojugal crease or tear trough in a number of ways. Drooping tissue can be lifted up with the aid of sutures, material (fat or synthetic fillers) can be injected or placed right into the crease line to efface it or implants can be placed to replace the absorbed receded bone. It is difficult to treat the area because the soft tissue between the edge of bone and outer skin surface is so thin and the skin is very thin as well. Because most of this soft tissue is in fact muscle with little fat or skin there is a tendency for anything injected into this area (restylane, fat, sculptra etc.) to form visible lumps and/or be visible through the thin skin. Muscle movement also tends to make the injected material coalesce into lumps. The width of area you can safely inject into is very thin and if you inject right on the bone or just under the skin you will have a problem with most fillers. Some surgeons therefore advocate placing an implant made of silicone, medpor or goretex right on the edge of bone under the eye with the thought of augmenting to replace lost receded bone.

For over 50 years plastic surgeons removed the eyelid fat through a skin incision (as in this Afro-American patient) or an incision on the inner surface of the eyelid when performing lower eyelid blepharoplasty. This approach hollowed out the eyes and accentuated the appearance of the tear trough. Although it got rid of the protruding eyelid fat it did not restore the youthful invisible transition between lower eyelid and cheek.

The facial skin is different than other areas of the body in that there are ligaments directly connecting the deep surface of the skin to the bone. In the palpebromalar groove the ligament is called the orbicularis retaining ligament. Lower down on the cheek is another ligament called the zygomatico-cutaneous ligament. The reason for all this is that different parts of the face move separately and with variable ranges of motion. Without these separating ligaments facial expression could not be so diverse. 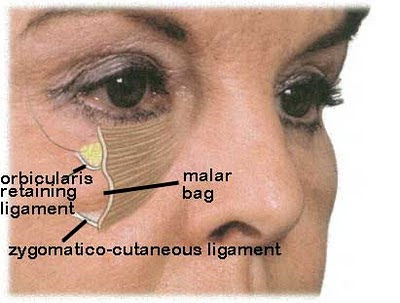 The zygomatico-cutaneous ligament can be tighter or shorter relative to the other ligaments causing a line along its length or malar bags to appear.

Injection works best for patients with thick, smooth skin, and a well-defined tear trough, without excessively protruding lower eyelid fat. Patients with extremely wrinkled skin and less of an actual indentation to fill do less well with injections. The larger the overhanging eyelid fat, the less improvement you will get from filler injection alone. The older and more crepe-like the skin, the less well the injection works.

In the tear trough, hyaluronic acid like restylane or juvederm lasts far longer than it does in the lips and nasolabial folds. One to 1½ years is not uncommon. Only small amounts 0.2 to 0.4cc are injected at a time and into or beneath the muscle. Then massage is used to even it out and prevent lumps but over massage can displace the filler. Some doctors prefer using a blunt tipped needle to avoid piercing any blood vessels under the skin. If you need skin removed as well its better to have it removed and then recover before doing the injection. Filler injection is not a substitute for surgery in those who would benefit from surgery i.e. have protruding eyelid fat or excess lower eyelid skin.

Belotero is another hyaluronic acid that was approved in November 2011. When it is processed the hyaluronate chains are crosslinked in a non-uniform fashion so that the amount of crosslinking varies through the different parts of the injected gel. 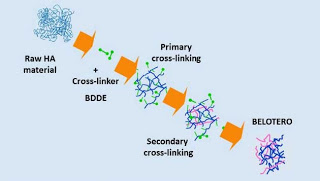 In this diagram the crosslinking is represented by pink lines that are non-uniformly distributed within the mass of hyaluronate. This allows the material to get into the nooks and crannies of the skin when injected superficially. It is then less likely to form clumps, attract water molecules or reflect blue at that level (Tyndall effect) than restylene or juvederm, which makes it a better choice for tear trough filling. It can be injected between the eyelid orbicularis muscle and the overlying skin which is a much more superficial level than can be tolerated by other fillers. However, if more than a few tenths of a cc of the material is injected it can cause the same problems of Tyndall effect and visible swelling.

63 year old with injection of 0.2 to 0.3cc of Belotero to each tear trough and palpebromalar groove. The after photo was taken only 1 week after the injection. The only problem with this approach is that it is not permanent or even semi-permanent. 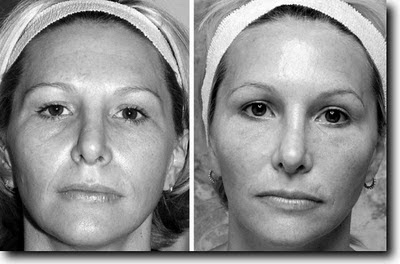 Before and After Placement of Infraorbital Goretex Implants

This seems excessive given the results that are currently achievable by injection as depicted above. 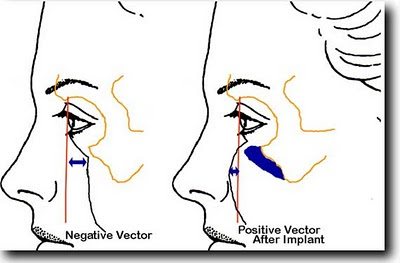 I prefer to use implants only if the vector of a perpendicular from the cornea drops down in front of the cheek tissue, a negative vector. In such cases the use of an implant can convert the patient to a positive vector and significantly add to the end result. The presence of a negative vector in and of itself also makes the tear trough more visible over time. 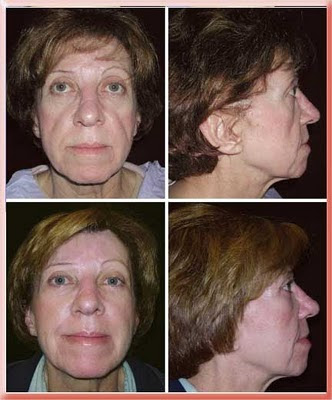 This is a patient of  Michael J. Yaremchuk, M.D., FACS.
This patient had a negative vector that was improved with the use of an implant.

TREATMENT WITH FAT GRAFTS OR MANIPULATION OF EYELID FAT
This is my preferred approach because it gives virtually permanent results with less risk and a natural look but it cannot be performed on every patient. 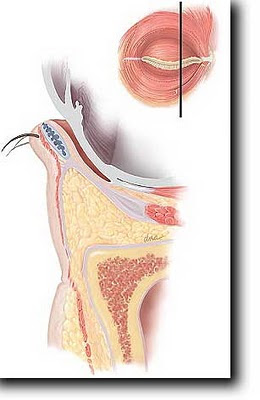 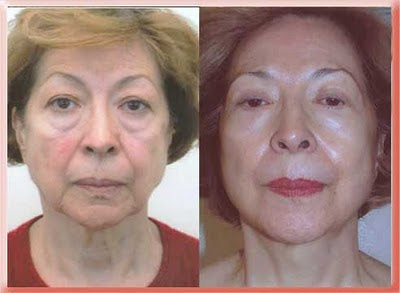 In this patient I removed excess eyelid skin via an incision just under the eyelashes, cut the orbital septum membrane and sutured the eyelid fat to the deep cheek fat. Only a small amount of eyelid fat was trimmed away or removed.

This younger patient had no excess eyelid skin so I only cut the orbital septum membrane and then sutured the eyelid fat to the deep cheek fat. I did not remove any fat from the eyelid.

In older patients with hollowed out eyes that are undergoing a facelift I prefer to take some superficial cheek fat (SMAS) and place that is a graft over the edge of the bone. That gives much the same result as the filler injection shown above with almost no risk of lumps or unevenness and the added advantage of being permanent.

The most difficult patients to treat are those with protruding eyelid fat that moves in and out of the eyeball socket as the eye is moved around. If you just suture the eyelid fat to the deep cheek fat the continual backward forward movement of the fat will separate it from the cheek fat and over time lead to a recurrence of the problem.