Social media coupon sites such as Groupon and Living Social entice consumers to buy online coupons for products, services and procedures offered by a provider at a reduced price with the addition of a viral component in terms of likes and comments that appear on users facebook timelines.

These social media sites receive payment based on the number of consumer participants, and the arrangement generally brings higher-than-normal customer volume to the providers – in this case, plastic surgeons. However, some elements of this marketing should raise red flags with surgeons as well as patients, including:

Many states have anti-kickback and ‘fee splitting’ rules for doctors. These rules forbid medical doctors from giving a payment to anyone for a referral. In other words, awarding a commission to an advertiser based on the income generated or number of patients treated is illegal. The use of Groupon violates those laws in California, Florida, Illinois, and New York State

Groupon has acknowledged that there may be issues with particular states and their licensing authorities, “Groupon advised [the American Society of Plastic Surgeons] through its counsel that it has not independently done a legal analysis and assessment as to whether the Groupon program violates federal or state laws regarding flee splitting, kickbacks, and referral fees.” Groupon does not consider it their obligation to determine whether these services are legal or not. “Groupon is taking a ‘buyer beware’ position and assumes no responsibility for determining whether the program raises legal implications for the service providers (doctors).”

In December 2011 British authorities banned an emailed ad from the “daily deals” website Groupon offering bargain rates on cosmetic surgery — including breast enlargements — and launched an investigation into the U.S.-based site. The ads offered discounts of well over 50 percent on operations at a Manchester clinic. The deal was for a cosmetic surgery procedure, “Such as Breast Augmentation and Rhinoplasty at Birkdale Clinic.” For £1,999 (just over $3000 US) consumers could receive £5,000 9 (about $7750 US) toward a breast or nose job (or other procedure), a very significant savings of 60 percent. The ban came after Britain’s Advertising Standards Authority received a complaint from the public and from the Independent Healthcare Advisory Service that the Groupon deal was irresponsible “because it encouraged recipients to hurry into a decision to purchase cosmetic surgery.”
A Groupon statement denied that allegation, noting that the offer, available for only 24 hours, was made in conjunction with the clinic that provided the surgery, and that the tactic of a time limit was “an indicator of their business model and was not indicative of pressure purchase tactics.” Recipients of the email could click through to regulations that stated that purchasers had to be over age 18 and that an initial consultation was required before any procedure. The ASA pointed out that the marketing and ethical code established by the British Association of Aesthetic Plastic Surgeons prohibits ads that offer discounts linked to a deadline date for booking appointments. The practice also goes against General Medical Council guidelines. The ASA said the email promotion was irresponsible and banned it. The agency referred Groupon to the government’s Office of Fair Trade, which revealed it had launched its own investigation

Since most businesses using social media coupons realize the customer is only there for the bargain and will likely go away when the bargain is gone they try to sell them additional services not included in the coupon. They know they will not make any profit off the delivered service and there is a good chance it will not result in new referred business. Aside from upselling the only other option is delivering less than the actual service such as over diluting botox prior to administering it.
Facebook has joined this online coupon craze with Facebook Offers. 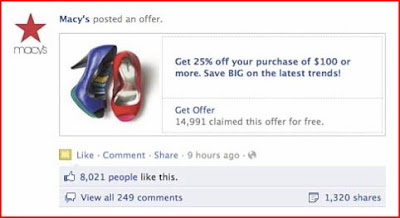 The whole idea of social media discount coupons may be a bad business model as evidenced by the drop in share price of Groupon stock from $26 per share around the time of its IPO in 2011 to its current share price of $7.21 per share as well as publicized infighting between the founding partners over company direction. Facebook as well as dropped from over $40 per share near its IPO earlier this year down to $27.15.

January 10, 2013 Addendum:
The Medical Board of California filed a 94 page complaint against Dr. Efrain Gonzalez who is a non-plastic surgeon performing plastic surgery on unsuspecting patients in northern California. He lost his license in Puerto Rico in 2006 for practicing plastic surgery without being a plastic surgeon. The charges include gross negligence, incompetence and aiding or abetting the unlicensed practice of medicine in 15 patients. The injuries include damaging nerves to the hand paralyzing it during breast augmentation, leaving large uncloseable scalp wounds during hair grafting, mutilating the abdomen during abdominoplasty etc. Many of these patients when interviewed say they went to him for his low prices and Groupon deals. Now they are suffering the consequences.