The function of the thyroid gland in the neck is to take iodine, found in many foods, and convert it into thyroid hormones: thyroxine (T4 with 4 iodine atoms) and triiodothyronine (T3 with 3 iodine atoms) by combining it with the amino acid tyrosine. The normal thyroid gland produces about 80% T4 and about 20% T3 and T4 is mostly converted to T3 in the liver and kidneys. T3 is over 3 times more potent than T4. Thyroid cells are the only cells in the body which can absorb iodine. Iodine deficiency historically common inland and associated with the lack of food originating in the sea causes the thyroid gland to swell forming goiters. Worldwide, over 90% of goiter cases are caused by iodine deficiency. 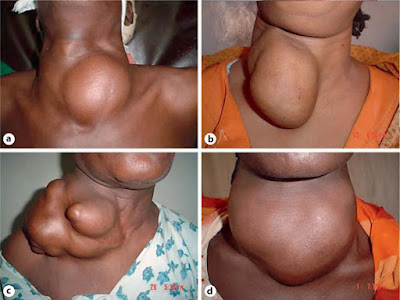 The enlargement can be on just one side, multinodular and can compress the trachea (windpipe). My mother had a goiter after spending her teens in Siberia. It was so large that she felt it choking her so when she emigrated to Canada she had her thyroid gland partially removed. In the early 1900s goiter was common in the Midwestern US. Since 1924 sodium or potassium iodide has been added to table and cooking salt in the US nationally. This has made goiter rare in the US. Over the following decade there was a gradual increase in average intelligence of 1 standard deviation, 15 points, in iodine-deficient areas and 3.5 points nationally directly attributed to iodized salt. Other countries reached this point much later, the Phillipines in 1995 and Romania in 2002. Much of the Chinese population lives inland, far from sources of dietary iodine. The Chinese government had held a legal monopoly on salt production since 119 BCE and began iodizing salt in the 1960s, but market reforms in the 1980s led to widespread smuggling of non-iodized salt from private producers. In the inland province of Ningxia, only 20% of salt consumed was sold by the China National Salt Industry Corporation. The Chinese government responded by cracking down on smuggled salt, establishing a salt police with 25,000 officers to enforce the salt monopoly. In 1996, the Ministry of Public Health estimated that iodine deficiency was responsible for 10 million cases of mental retardation in China. The medical term for such children born to hypothyroid mothers is cretin. Consumption of iodized salt reached 90% of the Chinese population by 2000.

The T3 and T4 are released from the thyroid gland into the blood stream and are transported throughout the body where they control metabolism (conversion of oxygen and calories to energy), body temperature, tissue healing and heart rate. Every cell in the body depends upon thyroid hormones for regulation of their metabolism. T3 and T4 are also needed for normal development of organs such as the heart and the brain in children and for normal reproductive functioning. Hence the relation between goiter and mental retardation in offspring. The output of T3 and T4 is controlled by feedback loops between the bloodstream and the brain and the peripheral (liver kidney) conversion of in order to keep the system finely tuned. 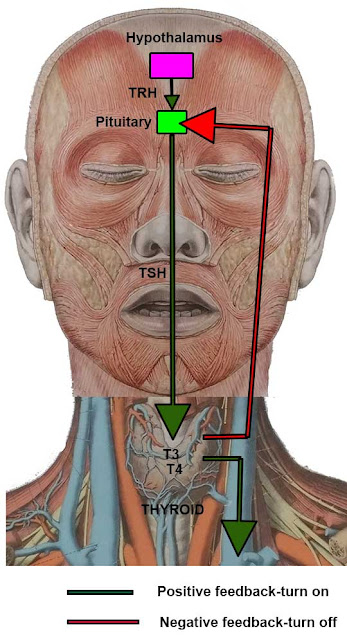 When the thyroid gland is functioning normally you are euthyroid. When it is over active you are hyperthyroid and when it is functioning below normal you are hypothyroid, either of which is dangerous for a plastic surgery patient. The causes of abnormal function can be side effect of medications (such as lithium), genetic, autoimmune (Hashimoto’s disease where the body’s immune cells or antibodies attack the thyroid gland stimulating or stopping the production of T3 and T4), pregnancy, stress, nutritional deficiency, thyroid or pituitary tumors, thyroid surgery or environmental toxins (such as radiation exposure). If you’re a woman over 35 your odds of a thyroid disorder can be more than 30%. Women are as much as 10 times as likely as men to have a thyroid problem but the incidence in men is rising . It can be difficult for men to talk about changes in their bodies that are impacting things like sexuality and brain function so their diagnosis is more likely to be delayed. In either case the diagnosis is frequently missed and complaints are attributed to other diseases like ageing or straight forward depression for which antidepressants instead of thyroid hormone are prescribed. At least 30 million Americans have a thyroid disorder and half–15 million–are silent sufferers who are undiagnosed, according to The American Association of Clinical Endocrinologists.  The symptoms you feel that may indicate you have hypo or hyperthyroidism are:


HYPERTHYROIDISM SYMPTOMS
Anxiety and “feeling wired”
Increased appetite and feeling hungry all of the time without weight gain
Heart flutters or palpitations feeling like you skipped a heart beat, beating too hard or too quickly
Diarrhea
Shorter, lighter menstrual periods that are further apart
Feeling warm even when it is cold and heat intolerance
Difficulty sleeping due to anxiety with or without rapid heart beat
Overactive reflexes and nervous tremors
Fertility problems
Graves disease- protruding eyeballs and retracted eyelids exposing the eyeballs due to increase fat in the eye socket and scarring with shortening of the eyelid muscles.
Pretibial Myxedema-Swelling of the lower legs with deposition of mucin and glycosaminoglycans that appear as nodules under the skin and can create leg ulcers or entrap nerves in the leg 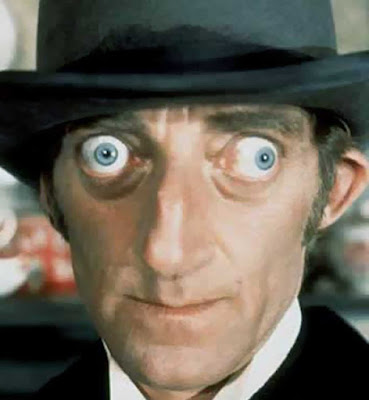 DIAGNOSIS (this is complicated so you can skip down to TREATMENT or IN PLASTIC SURGERY)
The diagnosis is straight forward if you have had your thyroid removed because of cancer or are already being prescribed thyroxine. In most other causes it can be hard to diagnosis. Getting properly diagnosed and treated is the key to avoiding long-term complications and reversing the current issues but it has its challenges. Do you measure antibody, T4, T3 or TSH levels in the blood? Thyroid hormones dissolve in fat while blood is mostly water. In order for the fat-soluble thyroid hormones to travel through the blood, they need to be bound to protein that act as little taxis to carry the thyroid hormones through the blood vessels to cells all over the body. When they reach the cells, the protein needs to be cleaved off because only the unbound “free” hormones can actually enter the cells and perform their necessary functions. In fact 90% of T4 and T3 in the blood is bound to protein and not available for use. Most doctors just check free T4 and TSH levels in which case low freeT4 and high TSH indicate hypothyroidism and high freeT4 with low TSH indicate hyperthyroidism. But what if your body has trouble converting T4 to T3, both free T4 and TSH are low, free T4 level is normal but TSH level is low etc.? Experience has shown that patients complaining of fatigue with normal freeT4 levels and mildly elevated TSH do not respond to thyroxine. This condition is called subclinical hypothyroidism. Subclinical hyperthyroidism is a below-normal or undetectable blood concentration of TSH with normal levels of free T3 and free T4. Subjects who have subclinical hyperthyroidism have a 65 percent higher risk of dying during the following 6 years than subjects with normal thyroid function.Therefore some people believe that for an accurate diagnosis TSH, Free T4, Free T3, inactive T3 and antibody (Thyroid Peroxidase Antibodies and Thyroglobulin Antibodies to check for Hashimoto’s disease) levels at a minimum must be obtained in order to make a diagnosis. You can order your own thyroid tests at www.truehealthlabs.com Complete Thyroid Panel 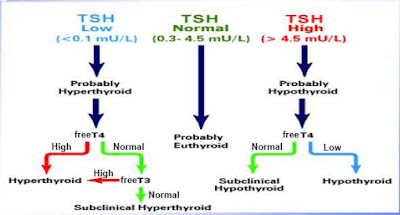 TREATMENT
Up until the 1950s hypothyroidism patients were treated with dried thyroid taken from pigs called Armour Thyroid. 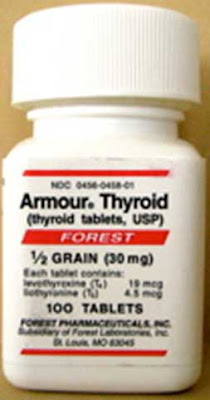 The glands are dried (desiccated), ground to powder, combined with binder chemicals and pressed into pills that include the entire dried gland and its contents, including all four forms of thyroid hormone (T4, T3, T2, T1), RNA, DNA and co-factors. The pig thyroid closely resembles the human thyroid therefore it provides the multiple components missing in hypothyroid patients. These pills however were inconsistent in terms of the amount of each component in each pill, some people were allergic to pork or could not take the medication for religious reasons. Then in the early 1960s, pharmaceutical companies entered the picture and began to mass produce isolated T4, which is the predominant form of thyroid hormone produced by the thyroid gland. The generic name for T4 is Levothyroxine. Pharmaceutical companies patented brand names like Synthroid.  However these T4 only medications do not work as well in patients who cannot convert T4 to T3 in which case the patient does not get better despite taking the medication. Now we also have synthetic T4 and synthetic T3 medications (such as Cytomel or compounded time-released T3) that some patients favor. Synthroid is adequate for most people but some may only improve with Armour.

Many hypothyroidism sufferers are not feeling well despite treatment because their lab results are in the “normal” range but not at the optimal level for them. Because of the dangers of hyper and hypo thyroidism these people need gradual changes in doseage under doctor supervision until they feel optimal. It’s about what works best for the patient and providing them with different possible options to try to see what works best.

The treatment of hyperthyroidism is propyl thiouracil, methimazole (to inhibit T4 and T3 production), Potassium or sodium iodide (to Prevent T4 and T3 release), Propranolol (to relieve some of the symptoms) and Radioactive iodine (to kill the thyroid gland producing T4 and T3). The treatment for Graves disease changes in the eye is surgical expansion of the eye socket and release of the eyelid muscles. The treatment for pretibial myxedema is injection of steroids. Graves disease and pretibial myxedema do not go away by just bringing down T3 and T4 to normal levels. 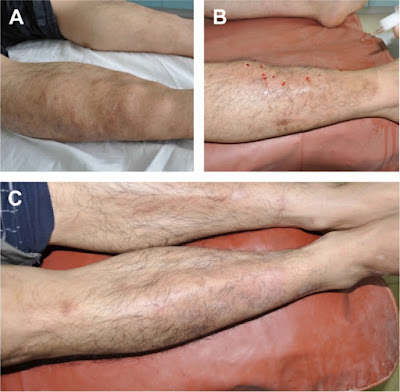 A. myxedema before and C. after injection with steroids.

Surgery on anyone with hypo or hyperthyroidism can be deadly. Hypothyroid patients are sensitive to anaesthetic agents in terms of dropping their blood pressure and slowed or stopped heart rate and take longer to recover from anesthetics. They have a poor tolerance to blood loss and other stresses. The stress of infection, surgery or trauma can put a hypothyroid patient into myxedema coma with
–  impaired mentation/coma
–  decreased breathing drive
–  decreased body temperature
–  low blood pressure
–  slow heart rate
–  slowed reflexes
–  low blood sodium levels.
The treatment is blood warming, synthroid, steroids, placement on a breathing machine (ventilator), and correction of blood chemistry in an intensive care unit.

Some plastic surgeons have reported Hypothyroid patients requiring transfusion of up to 4 – 6 units of blood as late as 10 to 15 days after liposuction surgery as red blood cell counts continued to drop over this time despite oral iron supplementation. Anemic iron deficient hypothyroid patients require intravenous iron because they have difficulty absorbing iron through the intestines.

A review of 198 patients undergoing facelift surgery between Jan. 1, 2014, and May 31, 2015 found 4 patients with hypothyroidism whose swelling lasted 13 weeks while normally most (75 to 80% ) of swelling normally resolves within 4 weeks.

The key to successful management of these emergencies is timely diagnosis and management by experienced physician in an intensive care setting.

Any patient on thyroid or anti-thyroid medications should have their thyroid function lab tests drawn  along with complete blood count and basic metabolic blood tests and obtain medical clearance shortly before under going any plastic surgery beyond very minor procedures. If abnormalities are found these tests have to be normalized by appropriate medications and medical care before any elective cosmetic surgery is under taken. The consequences of not doing so can be quite severe.<

Laser Hair Removal and Hidradenitis Suppur...Liposuction and its variants tumescent lip...Facelift, Midfacelift and Neck Lift 1Dark Circles Under the EyesScar RevisionVenous Leg UlcersCosmetic Surgery in Patients Taking Steroi...Care After SurgeryRepair Torn Earlobes - Enlarged Earring Ho...Skin Cancer
This website uses cookies to improve your experience. We'll assume you're ok with this, but you can opt-out if you wish. Cookie settingsACCEPT
Privacy & Cookies Policy