New plastic surgery statistics released 3/31/14 by the American Society of Plastic Surgeons (ASPS) show that breast lift procedures are growing at twice the rate of breast implant surgeries. Since 2000, breast lifts have grown by 70 percent, increasing from 53,000 in 2000 to 90,000 in 2013 vs only a 37% increase in breast augmentation surgery over the same time period. Breast implants are still by far the most performed cosmetic surgery in women, but lifts are steadily gaining. In 2013, 70% of these women were between the ages of 30 and 54.


At a young age the breast skin is taut and elastic and the ligaments holding the breast tissue to the chest wall are short and tight. With aging, exposure to gravity, weight changes and pregnancy the ligaments and skin are stretched and disrupted leading eventually to drooping sagging breasts, especially after breast involution following pregnancy and breast feeding. Surgery to correct this drooping is termed a mastopexy or breast lift and involves surgery on the breast skin and/or deeper breast tissue. The pencil test is a simple way for a woman to assess if breast lift surgery could be beneficial. A pencil is placed under her breast.  If the breast tissue holds the pencil in place against the chest that implies that there’s a hanging nature to the breast that may be improved with a lift. In assessing these patients the surgeon needs to know the history of breast sizes with changes in weight or pregnancy, breast measurements (breast volume, amount of breast skin envelope filling, nipple position on the chest, distribution of breast tissue, skin quality and amount, areola size, amount of skin show below the nipple on standing and asymmetry/symmetry).

These patients want fuller upper breast poles with breast tissue completely above the breast crease and no skin scars. Many also do not want breast implants. This is clearly not possible but a variety of options with variable tradeoffs are available. Historically breast lifts were performed by only removing excess breast skin. This was associated with a high recurrence rate as the skin and scars stretched over time. In the 1990s Brazilian surgeons began to shape the breast tissue under the skin at the time of surgery in order to decrease these recurrence rates.

When designing the pattern of skin removal one of the surgeon’s goals is to leave the patient with a round areola and no stray areola skin outside the confines of that round areola. The areola can be distorted by tight suture closures after removal of the skin excess. Another goal is to increase the visible skin between breast fold and nipple visible when one is standing upright. This is particularly important in breast augmentation because only putting breast implants into someone without this skin show on standing will not result in a good appearance.

Women with drooping breasts tend to choose large bra cup sizes for comfort reasons. After breast lift surgery, without augmentation or fat grafting, they commonly choose a bra that is a cup smaller than the one they wore before surgery. Breast lifts or mastopexies are frequently performed in conjunction with other breast procedures such as reconstruction after cancer surgery, breast augmentation and breast reduction with the removal of highly variable amounts of breast tissue. To improve symmetry different approaches are often employed for each breast.

Crescent Mastopexy is the removal of a crescent or half moon of skin anywhere along the edge of the areola on a portion of its circumference. The crescent can be only skin and/or can involve deeper tissues.
The skin only type is mostly used to adjust nipple position at the time breast augmentation in order to improve breast symmetry. The crescent can be placed anywhere around the edge of the nipple complex so the nipple can be moved in any direction. If you place a breast implant without doing this asymmetry can be increased leading to an unhappy patient after surgery. The deeper tissue crescent removal is used to change the shape of the breast, to make a tuberous breast rounder. The deeper tissue removal can also be done with various patterns of skin removal to achieve the best result. 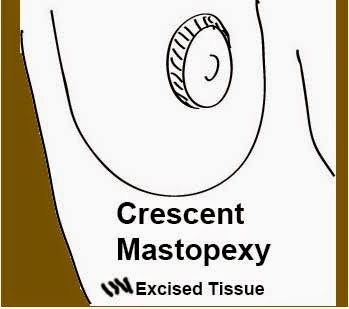 The main limitation to the procedure is areola distortion if the skin crescent width is too large. In most cases this limit is 1cm in width.

This procedure involves the removal of a donut of skin around the areola so it is also called a donut mastopexy or Benelli mastopexy. 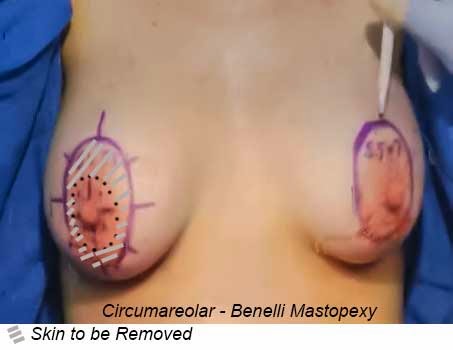 Some years ago these were done cutting out large donuts and freeing up the skin down to the breast crease and up to the collar bone. Patients liked this approach because they felt a scar around the areola would be less visible but these aggressive circumferential mastopexies were associated with multiple problems. The limitation of the procedure is the outer of the donut cannot be more than 1.5 to 2 times the circumference of the inner donut. If you exceed these dimensions the breast mound is flattened, the areola is stretched over time to abnormal size, the scar thickens and widens so it is more noticeable and the outer edge skin can bunch up creating a corrugated cardboard or pleated appearance.

To maintain areola shape over time many surgeons place a round purse string suture in the surrounding edge of skin. This suture can pull through the tissue, break or poke through the skin losing its ability to maintain the areola shape. In case reviews this type of lift is associated with highest rate of revision surgery.

Vertical mastopexy raises or lifts the nipple by removing an inverted triangle of skin between the nipple complex and the breast fold. When the triangle is closed the nipple is pushed upward. 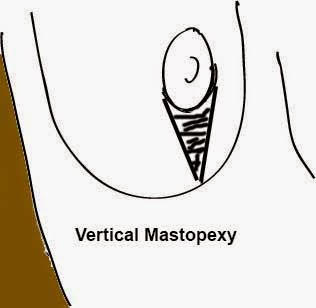 The size of the triangle is limited by the tendency of this lift to flatten the lower half of the breast with larger triangles.

If the nipple is in a good position and the majority of the excess skin is in the horizontal plane a horizontal crescent combined with a vertical ellipse removal of skin results in a Y-scar vertical mastopexy.

The main use of this lift is to minimize skin surface scarring and avoid a horizontal scar in the breast fold. This lift however will not fill the upper half of the breast and the amount of skin that can be removed is very limited.

This approach combines a circumareolar with a vertical lift. 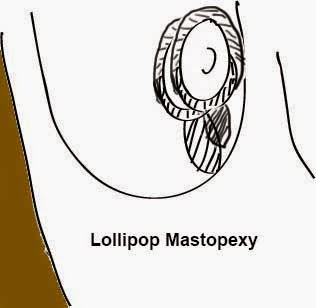 The inverted T-mastopexy has been the work horse of breast lift and breast reduction surgery for decades.

This type of lift has the highest “bottoming out” rate compared to other types of lifts. Its occurrence is minimized by making the vertical limb of the T only 5 cm.

There are variations of this which result in L shaped skin closures/scars.

They fall between inverted-T and vertical designs. Some surgeons like them but I have not found them to be useful in most cases due to the asymmetric removal of skin relative to the mid-breast axis. 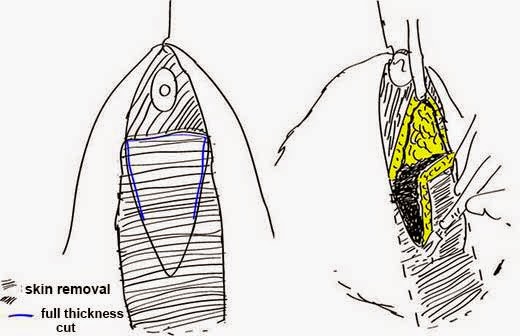 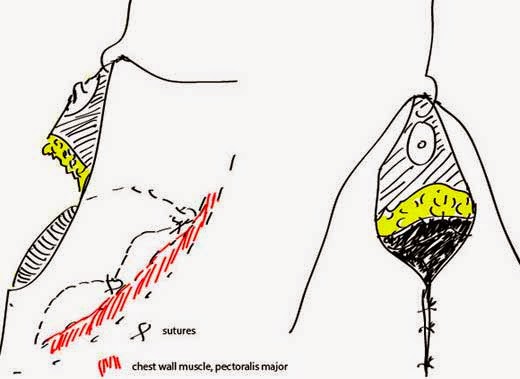 inserting prosthetic absorbable or non-absorbable meshes to hold and shape the breast tissue, 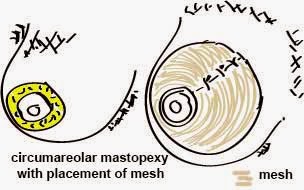 injecting fat from other areas of the body and creating slings of denuded skin from the excess that is otherwise removed that are sutured deep in the breast to hold and lift the tissue (laser bra lift).

There have been no controlled studies that prove the superiority of these techniques over skin only procedures. Many of these originated in Brazil and I saw them when I was training there but gave them up after a short trial in the US as I felt that long term they did not do anything other than add to operating room time and the expense of the surgery. Stitches between breast tissue and chest muscle eventually pull through the fat. Tongues of breast tissue that are dissected out and passed under the breast mound can die and therefore only result in a smaller breast. Absorbable meshes dissolve and any utility they provided disappears shortly thereafter.

Recognizing this problem with breast fat sutures some surgeons have advocated punching a hole in the muscle and passing a tongue of breast tissue from under and behind the muscle to on top of the muscle (Graf Mastopexy). 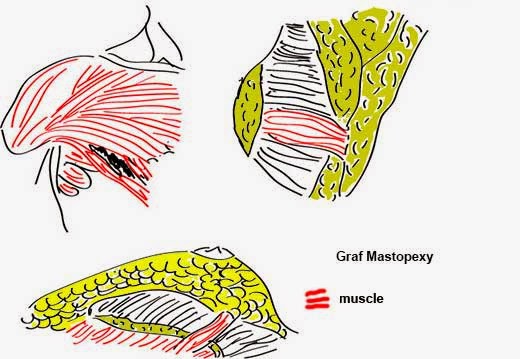 This is supposed to circumvent the problem of sutures pulling out of the breast tissue but introduces the possibility of breast distortion when the muscle is activated.

There are many different ways to perform a breast lift and even more minor variations of those ways. What is effective in one patient will not be so effective in another. If you see 10 different plastic surgeons you will get 10 different answers as to what type of breast lift should be performed. It is even more complicated if you place breast implants for augmentation at the same time. That is because the markings on the skin for surgery are made before the implants are placed and it can be very difficult to plan surgery accounting for skin stretch after the implants are in place. These combined procedure patients therefore have a high rate of redo or revision surgery even in the best of surgical hands.

My preferred lift procedures are crescent, circumareolar, lollipop and inverted T depending on an individual patient’s needs. I have not found the others to be beneficial in my patient population. 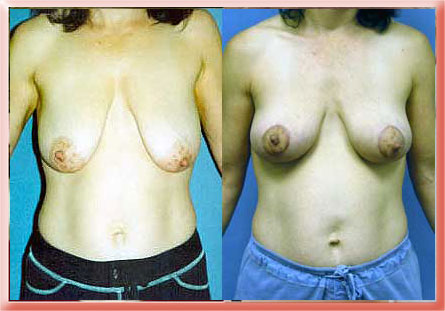 Note that skin is not visible between the nipple and breast fold on the standing view before surgery. Breast augmentation alone in this type of patient never ends well. 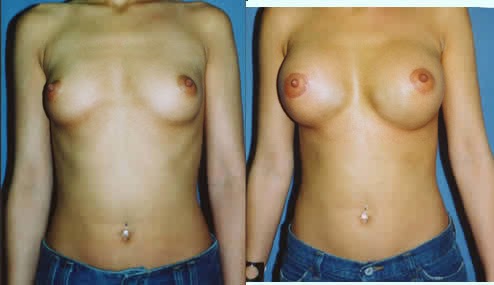 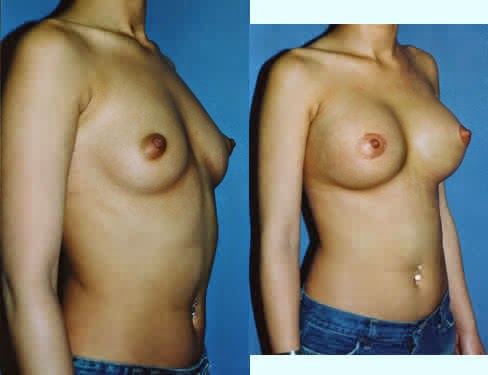 Smooth saline implants (400cc on the right and 375cc on the left) were placed under the muscle. In this case both nipples had to be moved closer to the midline during surgery using crescent mastopexies. Breast augmentation without a mastopexy would have increased the nipple divergence.

The aesthetic goal in breast surgery (augmentation, reduction and lift) is nipples that are 20cm from the notch on top of the breast bone, 11cm from the midline and 7cm from the fold under the breast with all of the breast tissue centered under the nipple. Sometimes we go to 21 vs. 20, 8 vs. 7 etc. to end up with less skin scarring/smaller skin incisions. No matter how much lifting we do we cannot get the kind of upper breast fullness seen in the bottom photo without a breast implant. In some cases fat grafting may achieve the desired amount of upper breast filling.

Thigh Buttock Lift - Belt LipectomyBandages and Dressings for #HidradenitisSu...Facelift, Midfacelift and Neck Lift 1View Map to Find the OfficeThe drooping nasal tip - drooping tip of t...Reconstruction After Breast Cancer SurgeryLearn How to Choose a Plastic SurgeonLaser and Intense Pulsed Light (IPL) Safet...Brazilian Butt Lift - Buttock Augmentation...Bite a breast implant and die
This website uses cookies to improve your experience. We'll assume you're ok with this, but you can opt-out if you wish. Cookie settingsACCEPT
Privacy & Cookies Policy