Inflammation of the armpit glands or #Hidradenitis, was first described by Velpeau in 1839. In 1854, Verneuitt suggested that this condition might arise from the sweat glands of the skin and described the clinical condition which is now recognized as hidradenitis suppuritiva. Since then, hidradenitis surgeons have recommended many forms of treatment for this entity: lotions, vaccines, fever therapy, toxoids, steroids, ultraviolet light, X-rays, antibiotics, and surgery. The disease does not occur before puberty because the apocrine sweat glands do not function at that age. Patients see this as boils under the armpits that swell, drain foul smelling material and then swell again as the cycle starts over again.

The skin contains two types of sweat glands, the eccrine and the apocrine. The eccrine glands are distributed over the entire body’s skin surface. The apocrine are found only in the armpits, groin, anal and pubic areas and the crease under the breast. Apocrine glands are 1arger than eccrine, are located more deeply in the skin and are derived from hair follicles. They do not function until the age of puberty. In lower animal forms the apocrines are a scent g1and of sexual function. Apocrine glands are more numerous in females and in Afro-Americans. Apocrine sweat secretion contains part of the gland itself while eccrine sweat glands produce a water like secretion without any disruption of the gland.

Hidradenitis is not caused by deodorants, antiperspirants, cosmetics or hair removal creams/procedures. Obesity may aggravate the condition but is not a direct cause of hidradenitis. Usually, a plug of dead skin in the duct of a gland emptying into a hair follicle initiates the infectious process as bacteria multiply within the plugged gland. As the armpit gland swells a boil is seen under the armpit. The obstructed gland or boil ruptures into the deep layers of the skin; adjacent glands become involved; and abscesses form. Subsequently, multiple draining sinuses or holes appear on the skin surface and the whole hair bearing area may become inflamed. Such inflammation may result in star shaped skin scars and tunneling, causing ridging of the skin. The sinus tracts are considered the hallmark sign of hidradenitis. Another interesting finding has been the armpit and groin hair follicles are wider and deeper in hidradenitis although the exact cause and implications of this finding are unknown. 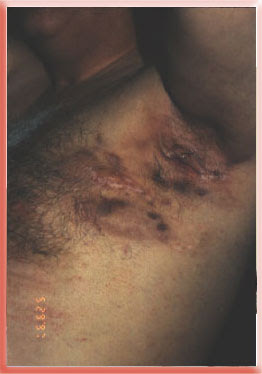 In this case of Hidradenitis of the armpit of many years duration multiple draining sinuses or holes on the skin surface, star shaped skin scars and tunneling causing ridging of the skin are easily seen.

This chronic infection usually continues for years with periodic remissions resulting in reclusive behavior, diminished ability to exercise and multiple days of work lost over time. The problem is these specific glands, the material they secrete and the way in which they secrete it. The disease is most common in the second and third decades of life and is three times more common in women. Groin genitofemoral hidradenitis is significantly more common in women than in men. Armpit involvement is equal in both sexes. Patients with hidradenitis have more relatives with the disease than patients without hidradenitis although an exact chromosome carrying the disease has never been identified. Only rarely is hidradenitis controlled or cured with medications alone. The treatment for active infection is incision with drainage of the pus. The cure is to cut out all sources of infection and closure of the resulting wounds directly or with skin grafts or preferably skin flaps while the process is in a quiescent phase. The best appearing results are after direct or skin flap closure. Hence the need for a plastic surgeon.

When those sources of infection are removed they cannot cause any future problems. However, glands that have not been problematic to that point in time may become so at a future date. Although that is a theoretical possibility I have not seen that happen in my patient population. The most common problem I see after surgery is some separation of the suture line days to weeks after surgery. This is due to the tension of closure and the condition of the skin, which prolongs the healing process. In all cases these small separations have healed without any further problems. To decrease the risk of this happening and make any such separations smaller I place a few mattress sutures which approximate the skin edges without applying any tension to the edges.

Ignoring the disease or avoiding treatment is not a good idea because the disease is associated with a number of complications:

TREATMENT
Treatment should take account of the phase in which the process is observed. In the initial stages, corticosteroid preparations are useful. During acute flare ups with draining pus incisions are made to ensure all of the pus is removed and the patient is given antibiotics. You cannot removed the infected skin during these flare ups because you will not be able to suture the cut edges together in this infected environment. Vitamin A related medications like Accutane commonly used to treat acne have been prescribed but large cases series suggest that less than 25% of hidredenitis patients respond to such treatment.

When the chronic phase with sinuses is present only surgery by a hidradenitis surgeon will be effective. The operative treatment should consist of complete surgical removal of the involved area. Closure should preferably be with local flaps of skin. Free skin grafts are useful in certain cases. 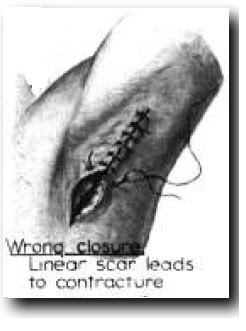 If you just cut out the hidradenitis and try to suture the wound closed the edges may not meet with larger excisions and if they do meet the resulting scar and skin loss usually restricts arm movement.

Historically the remaining wounds were aloud to hear on their own which took months. A period of wound closure with skin grafts followed but only one armpit could have surgery at a time, the grafted armpit had to be immobilized with an airplane splint holding the arm out to the side for 2 weeks and the act of obtaining the skin graft created a remote area of skin scar elsewhere on the body. Also the skin grafted area is a different color than surrounding skin and lies in an indented area so the result is less aesthetic than skin flap procedures. 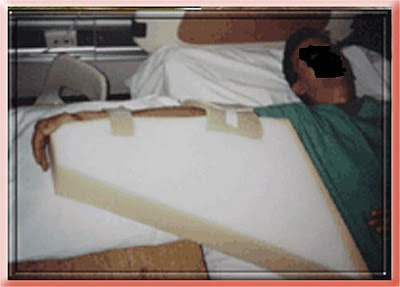 With improvements in plastic surgery techniques in the 1950s and 1960s a switch from skin grafts to skin flaps for closure after excision took place. The initial flaps used for this came with their own set of drawbacks. They were quite large and required skin grafts to close the area where the flap came from. 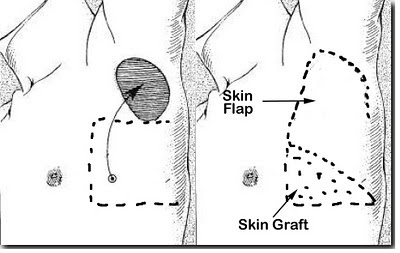 Then came skin flaps that were designed in such a way that skin grafts were no longer needed. 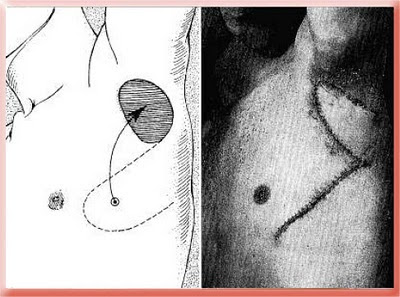 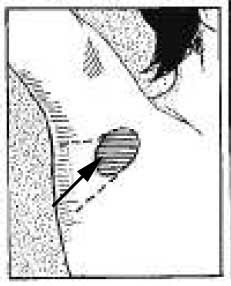 Then it became common knowledge that it was better to have 2 smaller flaps than one large one as that kept the scar confined within the armpit, still allowed closure without skin grafts, had a quick recovery without the need for splints, allowed a quick return to work, maintained arm range of motion and could be performed as outpatient surgery all without compromising the amount of armpit tissue that could be removed. 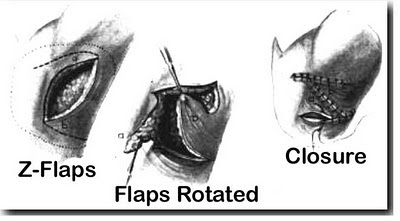 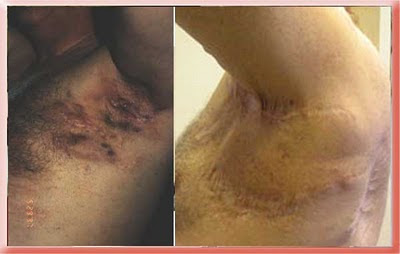 Closure with Flap from the Back

For more extensive disease the hole after removal is so great that I can only close it by moving a flap of skin from the back into the armpit area. In this case the after photo was taken 10 years after surgery without any recurrence of hidradenitis in that 10 year period.


For less severe cases or those who have had surgery earlier I prefer 2 opposing V to Y advancement flaps of skin. 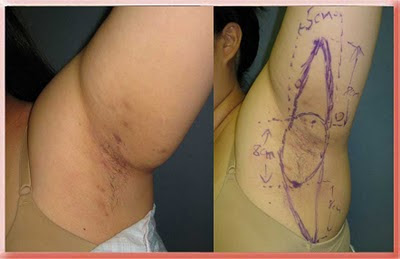 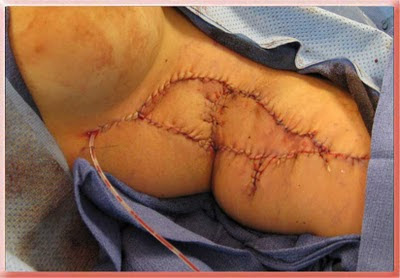 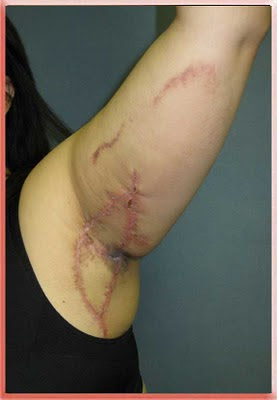 
In this case the surgery was performed while the hidradenitis was in a quiescent phase so the armpit in the before surgery photo does not look so bad but it looks much worse when the disease is active and there is pus draining out of the skin sinuses. The surgery is considered successful because she no longer has active periods with draining pus and she has retained full range of motion. The cosmetic look of the armpit after surgery vs. during the quiescent phase before surgery is not a factor here.