Angioedema is rapid swelling (edema) of the dermis (deep skin), subcutaneous tissue (fat), mucosa and submucosal tissues (gastrointestinal or other hollow organ lining) that was first described in 1882. It is characterized by repetitive episodes of asymmetric swelling, frequently of the face, lips, tongue, limbs/hands or feet, and genitals that lasts 24 to 60 hours without itching or hives. In the gastrointestinal lining it can cause severe pain and increased girth with or without diarrhea or vomiting leading to unnecessary abdominal or gynecologic surgery. In the respiratory tract including the mouth and throat it can interfere with speech or swallowing and cause life threatening asphyxiation. In the urinary tract it can prevent urination. In the hands or feet it can preclude the use of the hands or ability to walk. In the face the eyes can be swollen shut.

HAE attacks are caused by the production of large amounts of bradykinin, that is normally broken down by C1-esterase inhibitor protein, in the bloodstream. 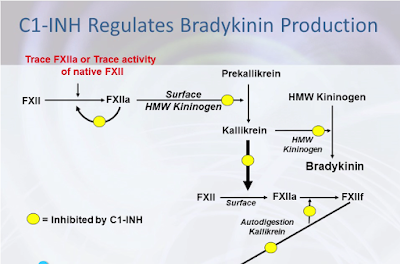 In the absence of C1-esterase inhibitor protein activity (the yellow dots) bradykinin production continues uncontrolled. FXII is factor XII a component of the blood clotting cascade. Bradykinin increases blood vessel diameter and pore size with leaking resulting in swelling of the tissue through which the blood vessels travel. It is so powerful that 1 microgram injected into the brachial artery increases arm blood flow 6 fold. Dental treatment, particularly tooth extraction, is a recognized trigger of HAE though symptoms may not manifest for many hours or even days after the procedure. A typical course resolves in 5 to 7 days, but in some patients, the clinical manifestations exist up to 6 weeks. Other known triggers are physical/psychological stress, fatigue, menstrual periods, pregnancy, trauma and having a breathing tube placed for anesthesia. 75% of patients with HAE have a relative who suffers from repetitive bouts of swelling. The remaining 25% are spontaneous without an affected relative. The diagnosis can be made by blood tests measuring the blood complement cascade proteins C1 and C4. Unlike allergic edema, HAE attacks do not respond to antihistamines, steroids or adrenaline including Epipens. The attacks vary in frequency, type and severity which contributes to delays in seeking treatment. 50% of HAE patients will have a laryngeal (voice box) attack within their lifetime, 40% of which are fatal if not treated emergently.

Between 2006 and 2010 there was a 27% increase in the number of patients admitted to US emergency rooms with angioedema probably due to increased use of medications that can cause it. 57% were female and 41% were African American. Angiotensin-converting enzyme inhibitor (ACE-Inhibitor) medication used for hypertension is a known risk factor for the disease as it prevents the body’s breakdown of bradykinin while having no effect on C1-esterase inhibitor protein activity. Most angioedema patients seek medical care a year after their first attack and are diagnosed after an average of 8 attacks and seeing 4 doctors. One survey revealed that it took 10 years for patients to get an accurate diagnosis after being diagnosed with irritable bowel syndrome, allergies etc.

Once diagnosed, prevention becomes an essential part of angioedema management. Because trauma is one of the most common triggers, elective operations—especially head and neck surgery, cosmetic surgery, intubation for general anesthesia, upper endoscopy, bronchoscopy, or dental work are usually preceded by an increase in the dosage of medications, such as steroids and antihistamines, 5 days before surgery. Some protocols advocate the preoperative use of concentrated C1 inhibitor (icatibant), especially when emergency intervention is required. Icatibant has been proven effective and life saving in both acquired and hereditary forms of angioedema with subjective relief in as little as 20 to 30 minutes.

Among patients with ACE-inhibitor-induced angioedema, the time to complete resolution of edema is significantly shorter with icatibant than with combination therapy with a steroid and an antihistamine, 8 vs 27 hours. In HAE it would be prudent to normalize the blood complement proteins with icatibant prior to performing surgery. Should you develop an attack during or after surgery, especially of the respiratory tract, you will need immediate access to these medications and possibly Epipens. In rare cases access to fresh frozen plasma is required. So patients with angioedema should have their surgery in a hospital not a surgery center. Prior to surgery your surgeon, anesthesiologist and internist need to work together to make the process as smooth and safe as possible. IF YOU HAVE ANY RELATIVES WITH REPETITIVE SWELLING TELL ALL OF YOUR DOCTORS. If steroid medication is required you will need to take vitamin A, starting before surgery, to counter the adverse effect of steroids on the healing process.

Your regular health insurance may not cover these additional costs depending on the wording of your policy and whether they consider an angioedema episode a complication of cosmetic surgery since it can occur with or without surgery. In that case it may be prudent for patients in the US to pay for temporary insurance that would cover such complications just for the planned surgery and the immediate time after surgery.