Between 1953 and the early 1960’s Dr. Edward Lewison performed free plastic surgery on inmates of the  Okalla prison in Burnaby, BC Canada. It was renamed Lower Mainland Regional Correctional Centre in 1970. The study involved 450 prisoners and was undertaken with the cooperation of Dr. Guy Richmond, the prison doctor, and Hugh Christie, the warden. Dr. Lewison and a sociologist chose patients on the basis of a  connection between a “bodily defect” and the inmate’s behaviour.
The idea was that reconstructive surgery that removed deformities would provide such a boost to the prisoners’ self-esteem and confidence that
they would be motivated to pursue law-abiding lives upon their release
from prison.

Most of the operations were for congenitally deformed or
fractured noses. The rest were for reconstruction
of deformed ears, receding chins and removal of facial scars.

Almost immediately after surgery, the inmates’ behavior improved. “Formerly hostile and incorrigible individuals became polite and
gracious in their manner … Among them a keen ambition developed to learn
a trade and qualify for transfer to the vocational correctional
centre.” The studies results were published in the Canadian Medical Association Journal in 1965 citing a 42 per cent recidivism rate for the plastic surgery patients vs. 75 per cent for the general inmate population. Lower Mainland Regional Correctional Centre was closed in 1991. The site is now a park.

Similar studies by different doctors carried out on inmates at Kingston
Penitentiary in Kingston, Ont. in the 1960s, in Illinois starting in the
1930s and in Texas in the 1980s had similar results. The theory is still in use today by non-profit
organizations in the U.S. which help reformed former gang members
to remove facial and body tattoos to help get them out of gangs into jobs. I have been a I volunteer tattoo removal doctor in Los Angeles since the mid-1990s to help get people out of gangs. The patients pay for their treatments by performing volunteer community services and some have gone on to well paying executive or managerial positions. I don’t think many people today would support free cosmetic surgery for inmates. In this crazy world some would commit crimes just so they could get the free surgery. 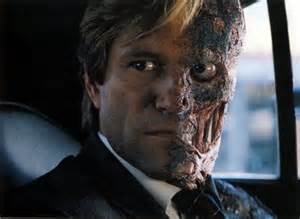 The best way to rehabilitate Two Face back to Harvey Dent would have been Plastic Surgery.

The BBC is currently looking for anyone involved to be in a documentary about the study.