As described in my previous blog Free Fat Grafting grafts of small pieces of fat removed from one area of the body and placed in another area was first attempted in the late 1800s and early 1900s. In 1893, German physician Franz Neuber grafted a piece of upper arm fat to a patient’s cheek. Two years later, in 1895, another German physician, Dr. Karl Czerny, performed the first documented breast augmentation when he grafted a fatty tumor from a patient’s lower back to repair a breast defect. With the introduction of liposuction in the 1980s the available donor source for fat injections rapidly increased. Although a minority of plastic surgeons currently inject fat into the breast to enlarge them for cosmetic reasons the tide is changing. In 1987 the American Society of Plastic Surgeons advised against fat injections into the breast due to concerns that it affected breast cancer detection and the survival rate of injected fat was unreliable. That opinion was reversed in 2008 in the face of increasing evidence that cancer detection and cancer rates themselves were not affected by the procedure. Now the flood gates have opened and everyone even non-plastic surgeons want to inject fat into the breasts. 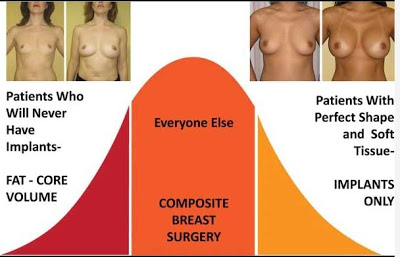 They also showed that the effect of the BRAVA on fat survival after injection was insignificant. The BRAVA system was introduced in 2002 as a means of increasing breast size without surgery. Placing your breasts in a vacuum for a couple of months was marketed as a means to increase your breast size. The increase proved to be inadequate and the system fell out of favor. Since then it has been a system looking for an indication for use. It sounded like a great fit to add it fat injections to the breast but even those who advocate it do not employ it between subsequent fat injection sessions after the first fat injection session.

The main problems with fat injections to breasts are unreliable survival of injected fat and the soft nature of the injected fat that lacks inherent structural integrity limiting the amount of projection like building a mountain of sand. The higher you want the mountain of sand to be the wider you have to make that mountain. That base width may not be achievable with fat alone especially in patients with smaller rib cages. The few disasters I have seen where surgeons tried to get away with fat injections to the breast in place of breast implants resulted from injecting too much fat in large clumps in one sitting. The result was a breast that felt like a been bag with large clumps of non-viable fat that the body was very slow to absorb and precluded any other surgeon from touching this patient to rectify the problem. It will likely turn out that the majority of patients will fall into the composite fat + implant group as depicted in the diagram above. That fat will be used to create cleavage in those who do not have it, improve size symmetry when one breast is larger than the other, alter breast shape when the breasts have different shapes and to cover visible implant edges in thin individuals. The need to see a qualified properly trained surgeon for your cosmetic breast surgery has just increased by several orders of magnitude.

A Harvard Business School Weekly study revealed that more than 58 million padded bras are purchased each year in the US in a $4.7 billion U.S. bra market. Presumably these individuals want larger breasts but not breast implants and some percentage of them would be good candidates for fat injections into the breasts.