Liposuction was first introduced in France in 1977. The technique involved the injection of diluted salt water to break the fat cells followed by stab incisions in less noticeable areas such as the belly button through which hollow metal tubes were inserted to suck out fat under general anesthesia. This was later referred to as dry liposuction because so little fluid was injected. This was temporarily modified in the early 1980s using metal tubes with recessed blades to cut the fat. This did not last as blood vessels and nerves were damaged in the process. The use of the dry technique with either type of metal tube was associated with a high percentage of blood coming out of the tube. This limited the amount of fat that could safely be removed at one time.

During the early 1980s the total amount of injected fluid was increased to what was called wet and then superwet liposuction. In superwet liposuction the amount injected equaled the amount of material removed. Some doctors would only use syringes for fat removal (hence the term syringe liposuction) while most preferred attaching the metal tubes to vacuum machines. In the late 1980s the injected solution was adjusted to included local anesthetic for pain control and adrenaline to diminish bleeding and bruising. The amount injected was increased to 3 times the amount removed and this was called tumescent liposuction. Some doctors began to rely on the injected solution for anesthesia and did so without the general anesthesia. This necessitated the use of very high concentrations of anesthetic and shorter smaller diameter metal tubes. This is called microliposculpture by some. Although the injected anesthetic did diminish pain during the procedure it is not the same as general anesthetic. Longer thicker tubes are not so easily tolerated under these circumstances. The drawback to this is more skin incisions that in some individuals heal with increasing pigmentation, scarring etc that can make them very noticeable and hard or impossible to fix.

As this progression occurred through the 1980s the maximum total amount removed at each operation continued to increase. This was then called high volume liposuction at total amounts removed greater than 5 liters (more than 2 or 3 pounds). 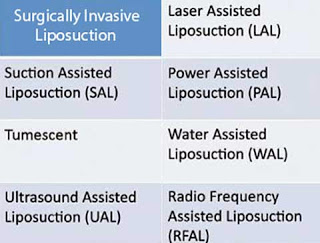 Power assisted liposuction was then introduced. This involves the use of motor that moves a metal tube within a metal tube. Essentially for each forward and backward motion of the surgeon’s hand during the liposuction the patient effectively receives 2, 3 or more times as many motions of the tube. In essence more fat can be removed per unit of time. It supposedly makes the surgeon’s job easier but offers no other advantage to the patient. Early models were loud and damaged the surgeon’s arm from the constant vibration. Vigorous movement of the tube can cause friction injuries or abrasions of the skin at the entry site.

This was followed by the introduction of ultrasonic assisted liposuction in the 1990s. This technology involves the use of sound waves passed down the tube into the body to break up the fat and then allow for easier removal of the fat. The sound waves however generate heat that can cause burns. To lower these risks the manufacturers have designed salt water irrigation systems that cool the tube while it is in use. Some doctors began applying external ultrasound to the skin surface from outside the body with the thought that the sound waves would break up the fat and easier liposuction would then be performed. Most doctors abandoned this approach until the mechanics were improved with the introduction of VASER.

VASER involves the introduction of ultrasonic sound waves under the skin into the area to be liposuctioned just prior to performing the liposuction. The sound waves break up the fat cells and the liposuction removes the materials released from the fat cells. Subjective measures (pain, swelling, appearance, and patient and physician preference) have shown no statistical difference between VASER and liposuction alone at the 6-month evaluation.

More recently lasers were added to the fray. Smart Lipo and slimlipo fall into this category. The laser fiber is passed through the skin into the body and the laser beam is then passed down the fiber. Proponents claim that it breaks up fat cells, coagulates any bleeding tissue and results in more skin shrinkage than liposuction without laser. Ergo there is supposedly less bruising and swelling and so recovery times are shorter. The skin shrinkage after laser assisted liposuction may end up being only in those patients with skin laxity from the aging process. This is different from excess skin due to being overweight. More scientific investigation is required before this can be considered true.

In studies comparing standard suction-assisted lipoplasty with internal neodymium:yttrium-aluminum-garnet low level laser-assisted lipoplasty (SmartLipo) at 3 to 5 days, 12 to 15 days, and 6 to 11 months showed no difference between the 2 methods in terms of surgeon and patient satisfaction, time used in the procedures, swelling, bruising, time of recovery, body mass index, DNA proteins. Less pain, lower lipocrits, higher triglycerides, and DNA cellular membrane traces were detected in the laser-assisted lipoplasty SmartLipo sides. Some sources have mentioned a concern that the higher blood levels of free fat in SmartLipo cases may pose a health hazard but this has never been proven. The bottom line is SmartLipo benefits the manufacturer monetarily more than it benefits anyone else.

The Zerona laser device received an enormous amount of media attention in 2009 – 2010. It uses low-level laser technology applied outside the body to dissolve fat that the body supposedly removes on its own. It was reported to take inches off your waist without surgery, anesthesia or any work on the patient’s part except payment. In fact Zerona’s 635nm laser cannot penetrate the skin so it cannot have any effect on fat cells. The materials supplied to support the technology show pictures of fat that was not covered with skin when the laser was applied.

Cryolipolysis involves the noninvasive cooling of fat to selectively kill fat cells without injuring surrounding non-fat tissue. Fat cell death is followed by slow dissolution of the fat cell and a gradual release of the fat contained within it. It takes 2-4 months for this process to reduce the fat layer. Studies of this methodology were first done in 2008 and this may end up being the preferred non-invasive fat reduction technique although it is likely all non-invasive methodologies will require multiple sessions vs. the usual only one session for conventional liposuction. Common effects after cryolipolysis include redness, which lasts minutes to a few hours; bruising, which may last for a few weeks; and temporary dulling of sensation in the treated area, which typically resolves in 1-8 weeks. No changes in skin color and no blood chemistry abnormalities have been found in patients treated with cryolipolysis so far. Some say the procedure results in a 20 to 25 percent loss in body fat in a
targeted area — about one-third of the result obtained through
liposuction. I am not sure that is sufficient to justify its regular use, suspect like a lot of other new technologies it will not deliver as promised and think it will end up leaving a lot of dissatisfied patients who will no longer have enough money to undergo the definitive liposuction surgery. I was at a symposium where the results of an older model cryolipolysis machine were displayed. That machine required pinching of the skin and pushing that pinched area into the machine head. It is very difficult to get a smooth result with that technology and the patient was left with huge unsightly divots.

With the introduction of each new liposuction technology the manufacturers tell doctors that each new machine gives better results, more skin shrinkage after fat removal and easier surgery for the surgeon to perform. They seem to me to be mostly driven towards selling their latest machine. In reality the benefits to the patient of one technology over another has never been proven after the introduction of superwet liposuction. In company funded studies UAL resulted in more skin shrinkage after liposuction than SAL. However in non-company funded studies where patients were randomly assigned to SAL vs. UAL on different sides of the body and those patients did not know which was done to which side of the body both the patients and evaluating surgeons blinded to the UAL SAL sides could not tell the difference between the sides in terms of overall results including skin shrinkage. If taken too far, attempts at enhanced skin shrinkage can result in irreparable damage and an very unsightly result. Some doctors rub the undersurface of the skin with the metal tubes in an attempt to cause some scarring that will shrink the skin. This is called superficial liposuction. It is misguided thinking because if done aggressively it causes skin dimpling and discoloration that cannot be fixed.

I do not personally do anything but the old fashioned standard liposuction. On a personal note one of my neck liposuction patients returned to me for lower abdominal liposuction after another surgeon over promised but under delivered SmartLipo of her arms.

While large-volume liposuction can improve cardiovascular risks and reduce blood pressure in obese individuals, it is not considered a standard treatment for obesity because of the associated health risks in removing such large volumes of fat in a short period of time. With proper monitoring though I have removed as much as 11 liters of fat (20+ pounds) at one operation in a hospital operating room with a 2 day hospital stay afterward and close monitoring by an internist.

Today liposuction is the most commonly performed cosmetic surgery in the United States. The holy grail of liposuction is a procedure that removes fat and tightens skin without requiring skin removal or surgical excision that leaves large scars.