According to a International Society of Aesthetic Plastic Surgeons survey the top 3 countries in the world in terms of the number of people in the country having plastic surgery are the United States, Brazil and China. Over 3.3 million plastic surgery procedures were performed in the US, 2.5 million in Brazil and 1.27 million in China in 2010. When you look at plastic surgery per capita to correct for the size of the population the picture is quite different. South Korea had the most per capita in 2010 with 16 procedures per 1,000 people. Half of them had non-invasive treatment including botox and facial peels. Next came Greece with 14 procedures per 1,000 population, followed by Italy, Brazil, Colombia, the U.S., Taiwan, and Japan. 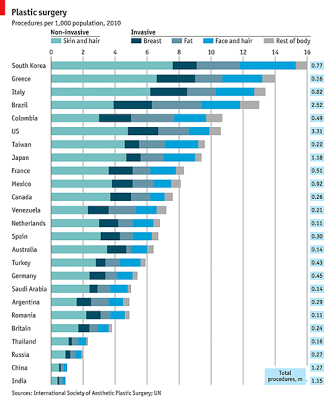 According to a 2009 survey conducted by market researcher Trend Monitor one in every five women (20% of the female population) in Seoul between the ages of 19 and 49 said they had undergone plastic surgery. So many women have had surgery that Korean film casting directors now have trouble finding female actors for historical films. There are so many plastic surgeons per capita in South Korea that it is driven down the price of surgery forcing many surgeons there to operate at least part time in nearby countries like China. Plastic surgery clinics compete by giving away free surgery to women who then must blog about there experience before, during and after surgery. These blogger ambassadors have to blog about their “beauty enhancement journey” for 5 years. The American Society of Plastic Surgeons on the other hand has a rule against its members trading free surgery for advertising endorsements.

No wonder South Korea has a Miss Plastic Surgery beauty contest. Last year’s 22 year old winner regularly talked about the procedures she had, sometimes disappeared for days presumably to recover from surgical bruising and swelling and refused to name the clinic where her surgery was performed.`This led to accusations that the procedures were performed in a minor clinic or out of the country. Then someone uploaded pictures from her school yearbook revealing that she had not had any surgery since the photos were taken. She then came clean that she never had surgery and that “it’s amazing what you can do with a bit of makeup”. She had to give back her title and other contestants are planning to sue her. On the other side of the coin the Miss Korea 2012 shocked Koreans when early photos appeared revealing that she had definitely had plastic surgery. Despite that it does not look like she will have to give back her title.

Korea also has an increasing plastic surgery medical tourism industry with 70% of patients coming from China. Hotels, such as the Ritz-Carlton Seoul,opened with their spa partner Possom Prestige in December 2011, have partnered with hospitals to offer a US$88,000 “anti-aging beauty package,”.  In 2011 foreigners arriving in South Korea for medical tourism contributed $116 million to the South Korean economy. The international boom is fairly recent, beginning in earnest in 2009 when the Ministry of Health first granted local clinics official permission to receive foreign patients. The government imposed a 10% tax on five popular types of cosmetic surgery in July 2011. Also in 2011 the Education Ministry issued a booklet warning Korean high school students of ‘plastic surgery syndrome’, citing Michael Jackson and a local woman whose addiction to plastic surgery left her with a grotesquely swollen face. 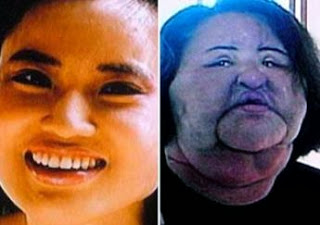 Following a television story of her condition and raising funds through donations surgeons removed 60g of silicone, oil and other foreign substances from her face and 200g from her neck, during the first of ten operations.

A female North Korean soldier who defected to South Korea revealed that double eyelid surgery is very popular in North Korea. Doctors, in need of extra income, are paid the equivalent of $2 to $3 to cut and re-fold eyelids in their patients’ homes. As you would guess some end up with unnatural results. However, Plastic surgery is illegal in North Korea because it is considered an ideologically subversive form of individual and class self-expression. Inspectors randomly examine girls’ eyelids at their high schools for any signs of the surgery. Anyone suspected of having artificially widened her eyelids is made to do punitive labor, to “donate” costly building materials such as concrete or at the very least to write a formal apology, the last of which is more pernicious than it sounds in a country obsessed with ideological fealty and permanent records.

The International Society of Aesthetic Plastic Surgeons survey also revealed that there there were local preferences for certain procedures. There are seven times more buttock operations in Brazil than the top-25 country average, and five times more vaginal rejuvenations. In Greece, penis enlargements are performed ten times more often than the average, with 592 such procedures carried out during 2010. The rate of nose jobs per capita in Iran is seven times that in the United States.

January 28, 2014 Addendum:
Nonhyeon-O Plastic Surgery clinic in Seoul’s chic Gangnam district has been fined for displaying a decorative tower made of bone removed from patients undergoing surgery to soften square jaw bones. chins, it appears. The clinic placed a transparent tower filled with 2,000 bones from 1,000 patients, each with a patient’s name on it, in its lobby and included a picture of it on their website. When the picture went viral on social media as the “Jaw Tower” someone, probably a competing clinic, complained to authorities. The clinic was fined $2,750, less than the cost of one of these procedures, for violating medical waste disposal regulations and order to remove the tower. 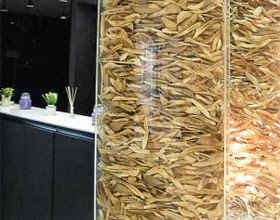 Recent Research in Hidradenitis Suppuritiv...Restylene Juvederm VolumaAbdominoplasty, thigh buttock lift and bel...What is Botox?Rhinophyma - Acne Rosacea10 Things to Consider Before Having Plasti...HomeLabiaplasty and VaginoplastyInjectable Fillers - Collagen, Restylane e...Thoracoplasty
This website uses cookies to improve your experience. We'll assume you're ok with this, but you can opt-out if you wish. Cookie settingsACCEPT
Privacy & Cookies Policy