Varicose veins are visible dilated tortuous veins. The term is usually only applied to those present superficially on the legs but they can occur anywhere including the testicles (varicoceles) and the face. The legs have a deep and superficial system of veins connected by another set of intermediary or perforating veins. The deep and superficial systems run longitudinally and the perforating system runs transversely to connect them. Veins have a lower pressure of blood flow than arteries so forward movement of blood requires massage by the movement of adjacent muscles and valves inside the veins to prevent back flow. The superficial veins become varicose when the perforating or deep veins are damaged allowing back flow or clot closed and/or the valves no longer function normally. 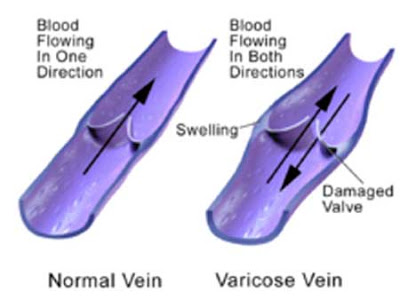 Chronic or large varicose veins can cause discoloration and thickening of the skin, swelling of the ankles and feet, actual skin breakdown with the formation of ulcers, blow out of the dilated veins with sudden high pressure bleeding, pain and aching muscles especially with prolonged standing and easily damaged skin. My father spent long periods of time standing without movement at his job and developed large varicose veins in his lower legs that ached and precluded him from working that way when he was older. This type of stationary standing work or prolonged sitting work (airplane pilots) are risk factors for developing varicose veins.

The standard measures to prevent varicose vein formation include pressure stockings, exercises to pump the muscles and periods of leg elevation above the level of the heart to empty the veins or stop them from dilating. When I was in medical school the main treatment for varicose veins once they developed was vein stripping. This involved making large cuts in the leg to expose the offending vein and passing a wire down the vein. Another cut was made near the ankle to expose the lower end of the wire to which a metal bullet was attached. The wire was then pulled out of the upper incision thereby ripping out the vein at the same time. The problem with this was it did work if the veins were serpiginous or tortuous and it left big scars. After I finished medical school sclerotherapy (injection of a sclerosant irritant or toxin into the veins) became the more popular treatment modality. The problem with this approach was the sclerosant frequently leaked out of the vein causing skin ulcerations or discoloration and the need for compression stockings until the maximal effect was achieved. Some doctors tried injecting milder irritants to avoid the skin ulcers but these were less effective in getting rid of the varicose veins. In the early 1990s removal of the veins via small needle holes using hooked crochet types of instruments became popular. This approach though was labor intensive and took time to perform. With advances in lasers and radiofrequency devices beginning in the late 1990s a slew of new machines were introduced including external application of vein destroying lasers, passage of a fiber into the vein to shoot a vein destroying laser into it, ultrasound-guided foam sclerotherapy injections and radiofrequency destruction of the veins.

Sapheon Inc based in North Carolina has introduced another technique called Venaseal involving ultrasound to show the actual veins and then injecting them with a tissue glue via a fiber threaded down the vein to close the varicose veins. 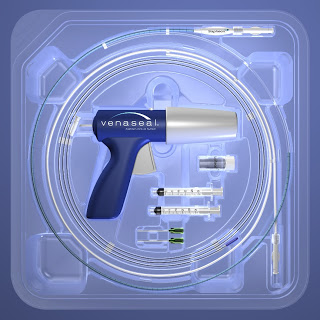 This must have some promise as investors have just injected $19.8 million into the company. EU regulators approved Sapheon’s system in September 2011. The treatment is currently being studied in the US for FDA approval. The current U.S. clinical study is a testing the system’s safety and effectiveness against radio frequency thermal ablation at 10 sites involving 242 patients. The study ends in July 2014 after which the treatment system should be available for use in the US.

Before removing, ablating or blocking superficial varicose veins it is imperative to verify that the deep venous system is working normally.