Lentigo maligna is a melanoma in situ that forms in sun exposed areas of skin, first described in 1892. Under the microscopic one sees a proliferation of atypical pigment cells in the superficial skin. They typically have a cloud like appearance with variable shades of brown coloring and start as a freckle that enlarges over a number of years. Historically they were called Hutchinson’s freckle. More than half occur on the face or neck. They are more common in warmer climates with greater sunlight exposure and the majority occur after the 6th decade of life . If ignored long enough they will develop a vertical growth phase and begin to invade the deeper layers of skin, dermis. They are then malignant melanomas and are called lentigo maligna melanoma. At the time of presentation 10 to 20% of lentigo malignas have already invaded the dermis to some degree. Although melanoma represents a small portion of all skin cancers, it is responsible for the majority of skin cancer–related deaths.

The diagnosis of melanoma of the lentigo maligna subtype is challenging, as the clinical presentation is quite varied, ranging from a subtle brown patch to tan/black or even amelanotic(almost normal skin color). These lesions pose significant treatment challenges for clinicians because of significant invisible to the eye surrounding extension, a predilection for cosmetically and functionally sensitive areas, and a naming system that is often confusing. Obtaining a biopsy specimen from a clinically suspicious lesion can present problems, given the lesions can be as large as 6cm in anatomically and cosmetically sensitive areas. If the suspicious lesion is
small, an excisional biopsy of the entire pigmented lesion to fat is recommended. However, an excisional biopsy is rarely feasible, as most lesions are too large with poorly defined margins to be completely removed. In this setting, a small biopsy of the darkest, or most palpable, or otherwise most visibly concerning area of the lesion is recommended.

Non-surgical treatment methods including cryotherapy with liquid nitrogen, laser destruction, radiation therapy and topical immunotherapy with imiquimod have recurrence rates as high as 20 to 100%. Surgical removal is the treatment of choice for lentigo maligna/lentigo maligna melanoma but is more challenging than diagnosis because the margin between lentigo maligna and surrounding normal or sun tanned skin can be difficult to determine and the standard pathology method of bread loaf cutting the specimen or frozen section methods under estimate the extent of the condition. Also fat has to be removed with skin to make sure hair follicles that could be involved are included. The 1992 National Institutes of Health consensus statement advised that 5-mm margins at removal (removing the visible lesion with 5mm of surrounding skin) were adequate in the treatment of melanoma in situ, but this recommendation was based on melanomas on the trunk and extremities. In the head and neck region, however, multiple studies have shown that the standard 5-mm margins are inadequate for excising lentigo maligna in up to 50 percent of cases. Therefore the recommended margin for lentigo maligna of the head and neck is 10mm unless they are on challenging areas like the tip of the nose. This means the holes left after removal can be 2 to 4 times the size of what the patient sees as the skin lesion when looking in the mirror. That can be a large hole! Performing wide excision and immediate complex facial reconstruction for these large defects without knowing the margins are clear can frequently result in incomplete excision, risk for recurrence, and disease progression over time.

The solution to the treatment problem is a 2 staged procedure with clearance of the margins in the first procedure in a thin square, waiting for a pathology report on the specimen and then removal of the skin and fat within that margin at the second procedure. Typically a 2mm double blade is used to remove the thin square allowing en face examination by pathology instead of bread loaf examination. If the margins are not clear the first time additional stages are added removing thin squares at 5mm until the margins are cleared before performing the definitive removal. 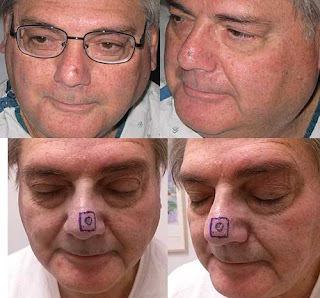 Lentigo Maligna of the nose and 5mm margin for excision. 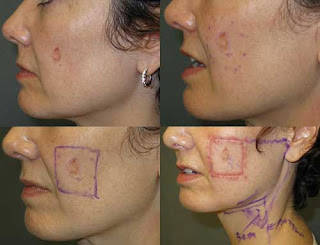 Lentigo Maligna of the cheek 10mm margin for excision and flap for closure after removal.
Tweet