Upper arm fat and skin removal to reduce hanging upper arm skin in obese women was first described in 1930. Cosmetic brachioplasty or upper arm lifts were first described by Argentinian surgeons in 1954 and subsequently became a well established procedure. However, due to the scarring, fluid collections under the skin, nerve damage and wound problems associated with the surgery it was not very popular. According to the American Society of Plastic Surgeons statistics as recently as the year 2000 more than 300 women got upper arm lift procedures in the US. Last year, 2012, the number increased to more than 15,000. 98% of these patients were women, 42% had undergone previous weight loss surgery, 63% were aged 40 to 54 and 33% were over age 55. The total spent on brachioplasties in 2012 was $61 million. What accounts for this 5 fold increase in the number of procedures over 12 years? Some of this is due to the increase in weight loss surgery. Over 200,000 Americans a year undergo some kind of weight-loss surgery, such as gastric bypass.

A follow up online poll of more than 1,200 women aged 18 and older found that women are paying closer attention to the arms of female celebrities. First lady Michelle Obama topped the list of admired arms with 31% of the votes, followed closely by actress Jennifer Aniston who scored 29%. 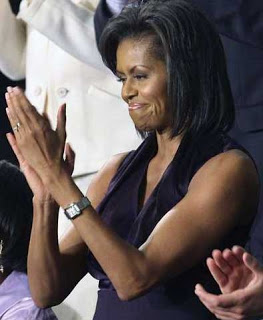 The published brachioplasty complication rates are 20 to 30% for bad scarring, 15% infection rates with revision surgery rates of about 20%. Clearly this is not one of our best operations. The published reoperative rate on rhinoplasties is only about 10%.

The desired end result is good arm muscle mass, little arm fat and no loose skin. A number of techniques have been employed for this surgery and we surgeons have finally figured out that there is a severity gradation to the problem. The least severe cases can get by with only removal of an ellipse of skin up in the armpit. As the severity increases skin has to be removed along the upper arm creating an armpit to elbow scar. For the most severe cases additional skin needs to be removed across the armpit onto the side of the chest. The trick is managing the junction between the arm and chest through the armpit.

This 44 year old 5’6″ patient went from 404 lb to 228 lb, after gastric bypass weight loss surgery leaving her with excess skin in the arms that would hang down through short sleeve shirts. She was happy after surgery that she could wear short sleeve shirts once more.

PIP Silicone Breast Implant RecallKeloid TreatmentNasojugal crease, tear trough deformity, n...Angioedema and Cosmetic SurgeryBreast Implants and BodybuildingGynecomastia RevisionHair Grafting - Hair TransplantationBeauty is in the eye of the beholder - Whe...GlossaryChemical Peel
This website uses cookies to improve your experience. We'll assume you're ok with this, but you can opt-out if you wish. Cookie settingsACCEPT
Privacy & Cookies Policy