Hemoglobin is the protein in red blood cells that carries oxygen. It is encoded by 2 genes in one’s DNA, 1 gene from each parent. Either or both of these genes can have a sickle cell trait so that the hemoglobin produced by either or both as the case may be is abnormal. If only one gene is abnormal the individual is said to have sickle trait. If both are involved the individual has sickle cell disease. The sickle gene is most commonly found in those of sub-Saharan African descent. It is thought that that is because the sickle trait confers resistance to the malaria that is present there. 0.5% of the Afro-American population has both genes and 8% have the trait. Under low oxygen levels the sickle hemoglobin changes shape and makes the red blood cell it is in turn into a sickle shape. Conditions that make the abnormal cells sickle include lowered body temperature, infections, acidic metabolic conditions, dehydration and as mentioned lowered blood oxygen levels. The sickle shaped blood cells have a shorter life span and tend to get caught in the smaller blood vessels of the body. The manifestation of this depends on the percentage of total body red blood cells/hemoglobin that is abnormal. Those with only the trait (one gene) have an easier time. When the percentage is high it is associated with anemia, stunted growth, sores on the legs, heart problems, shortened life span, organ failure etc. 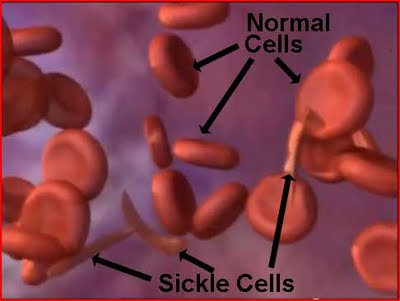 The affect on cosmetic surgery and the measures needed to ensure safe surgery depend on the percentage. At low percentages you do not need to do anything different from other patients. At higher percentages the patient may need pre-surgery treatment with one or more of the following supplemental oxygen, blood transfusion, over-hydration etc. If the percentage is very high the patient should probably not be having elective cosmetic surgery. Your surgeon needs to work together with a hematologist in order to ensure a smooth recovery after surgery.