Rhinophymas have been observed for centuries but the term rhinophyma (from the Greek rhis for nose and phyma for growth) was first used in 1845 by Hebra. It was initially thought to be due to chronic alcohol consumption but is currently thought to be a severe form of acne rosacea. Rosacea is a chronic inflammation and vascular condition that affects the face which in turn generates redness and visible blood vessels. There is bulbous enlargement of the nose with a ruddy complexion and numerous pits along the surface. The sebaceous glands of the nose increase in size and number with each surface pit being the mouth of a gland. Although the disease is benign superficial skin infections are characteristic with drainage of foul smelling material. It is 12 times more common in men than women.
In the early stages accutane may help shrink the sebaceous glands but could adversely effect future surgical treatment of the disease. For more marked disease the treatment is full thickness excision with skin grafting or tangential (partial thickness) excision allowing the skin to heal without grafting. Some surgeons prefer laser excision citing less bleeding among other reasons. Having seen and tried various modalities I think tangential excision with a scalpel under local anesthesia is best. The nature of laser excision makes this more difficult with laser which works from the surface downward rather than tangentially.

The nose heals within a week or 2 as the surface is repopulated by cells from the depths of all those pits. After it heals over the nose will be red for some months. This redness resolves on its own but its resolution can be quickened with the use of a flashlamp laser, application of topical steroid cream or covered in the interim with makeup.

Since the disease is not curable control in the early stages or after surgical excision and healing is of paramount importance to prevent recurrence. This involves continued use of oral tetracycline antibiotics at least a few times a week or topical application of metrogel antibiotic and meticulous skin cleansing. This prevents recurrence but is of no use in treating or decreasing the size of an existing rhinophyma. Avoidance of spicy foods, caffeine and alcohol also may help.

September 3, 2013 Addendum:
The US Food and Drug Administration (FDA) has approved the first topical treatment for red skin due to rosacea in adults. Galderma’s Mirvaso® (brimonidine) topical gel, 0.33%* applied once daily constricts the dilated skin blood vessels and successfully treats rosacea-related redness in adults. The approval of Mirvaso was based on data collected from more than 550 patients enrolled in two phase 3 clinical studies of 1-month duration. Study participants who used Mirvaso showed significantly greater improvement in the facial redness than those who used a vehicle gel. Common adverse reactions included erythema, flushing, skin burning sensation, and contact dermatitis. This will likely be very useful after rhinophyma shaving because virtually all patients have redness when the shaved area heals. 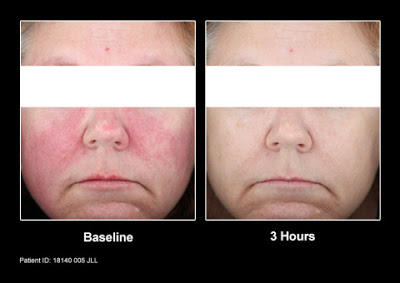 Before and after treatment of rosacea with Mirvaso.

October 10, 2013 Addendum:
A recently published study showed that 32 (51%) of 63 patients with rosacea had Small intestine bacterial overgrowth compared with 7 (23%) of 30 control subjects in the general population who did not have rosacea. 46% of 28 individuals with bacterial overgrowth given the antibiotic rifaximin had complete clearance of their rosacea. 25% moderately improved, and 11% mildly improved. No improvement was seen in 18%. (J. Am. Acad. Dermatol. 2013;68:875-6). This supports the connection between rosacea and intestinal bacteria first noted in 2008.