Syringomas are benign tumors of eccrine sweat ducts in the skin, first described in 1872. They appear as solitary or multiple small (1 to 3 mm diameter), soft to firm, skin-colored to slightly yellowish symmetrically distributed papules or bumps. The distribution may be localized or generalized. Localized syringomas are the most common and are usually found on the eyelids. Generalized syringomas are found mainly on the chest and neck, followed by the forearms. However, syringomas may appear on other body areas such as the penis, armpits, and buttocks. They are presumed to be due to chronic inflammation of the sweat glands or plugging of their ducts by the overgrowth of skin. 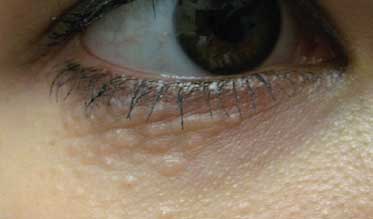 Syringoma localized to the lower eyelid. 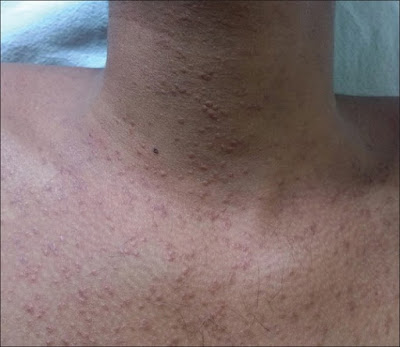 Generalized syringoma of the neck and chest.

They usually appear at puberty or in the third and fourth decades of life and are more common in Asians, African Americans and females. Family inherited cases have been described. Since they are not associated with any symptoms or cancers they are mainly a cosmetic problem. A number of treatment modalities are available, including surgical excision by scalpel or punch, Erbium or CO2 laser surgery, electrodesiccation, dermabrasion, chemical peeling, cryotherapy, topical tretinoin (retin-A), and combinations of these methods but complete removal is uncommon and no single treatment method has been shown to consistently work. Since they extend below the skin surface a superficial treatment alone will not suffice and because they tend to be multiple it is safer to treat them in a piecemeal fashion. Punch excision of larger lesions and a trial of low-voltage electrodessication and trichloroacetic acid chemical peel are suggested before treating all lesions. Syringomas are particularly difficult to treat in darker skinned individuals because of the added risk of skin discoloration or bad scarring.

Group Plastic SurgeryGynecomastia RevisionBeauty is in the eye of the beholder - Whe...Thigh Buttock Lift - Belt LipectomyScars, Keloids and Hypertrophic ScarsNerve Freezing Alternative to BotoxBotox Resistance or FatigueAbout Me and My BlogRhinoplasty - Nose SurgeryLearn How to Choose a Plastic Surgeon
This website uses cookies to improve your experience. We'll assume you're ok with this, but you can opt-out if you wish. Cookie settingsACCEPT
Privacy & Cookies Policy