Since the beginning of Plastic Surgery as a modern specialty, around World War I, Plastic Surgeons have been consulted to close wounds. In these cases the wound edges could not just be pulled together and sutured because of tissue deficiencies. At that time Plastic Surgeons would raise tubes of tissue (fat and skin) and slowly after multiple operations advance those tubes into the wounds in order to achieve closure.


With advances in medical equipment in the 1960s through 1970s Plastic Surgeons were able to move large mixed segments of tissue including bone, skin and or muscle from one area of the body to the other by severing and microscopically reattaching blood vessels to/from the transferred tissue. The next advancement was the placement of balloons or expanders which after surgical placement would be inflated and thereby stretch overlying tissues. The expanding balloon over a period of weeks would stimulate the body to create more skin in the same way that a growing fetus stimulates a pregnant woman to make more abdominal skin. The main drawback was the expanders could only be used for planned surgery such as separation of siamese twins, breast reconstruction after cancer surgery etc. They could not be placed near open wounds.

In the mid-1990s the application of negative pressure to wounds was begun by Plastic Surgeons. This vacuum assisted closure initially used bulky noisy machines that required hospitalization. The current machines in use are more compact, lightweight, battery powered, and computerized allowing patients to be mobile. They are not restricted to in-home use. The patients to a great degree can go on with their normal lives unimpeded.

The basic methodology employed is cleaning of the wound surface followed by placement of a sponge like material in the wound. A non-permeable plastic covering is placed over the sponge and a tube passing through the plastic attaches to the vacuum machine. The patient is seen once or twice a week to change the sponge and plastic and so does not need to do anything except turn on the machine. This is great for patients who previously had to change dressings on draining wounds 2 or 3 times a day. Furthermore it has been shown that the vacuum removes bacteria and dead tissue and makes wounds heal more rapidly. 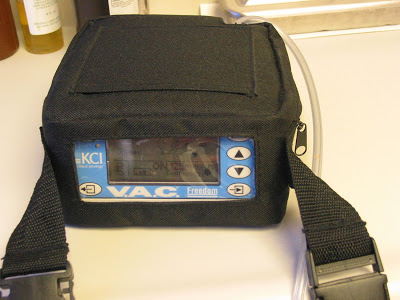 This was the portable VAC machine used by one of my patients who after a belt lipectomy – body lift developed an open wound on the back (the most common problem area for this type of surgery). By using this machine he was able to heal the wound completely within 10 days. He carried the machine over his shoulder with the strap shown and was quite active during that period of time. The tube in the photo was the tube that passed through the plastic covering the sponge in the wound. In that patient’s case his health insurance completely covered the cost of the machine. After he was finished with it the machine was sent back to the supplier so he did not even have to buy the machine.