Facelift surgery to treat the aging face started in the early 1900s. At first this only involved removing some skin in front of the ear and under the chin. Striving for greater improvement the surgeons started to cut just under the skin via these incisions to release it from underlying attachments and allow the removal of greater amounts of skin. This flattened the laugh lines (skin fold between the outer edges of the nose & outer corners of the mouth) and marionette lines and that was good enough. That was how it was done for the first half of the 20th century. Progress in the surgical technique was hampered by societal taboos. No doctor would admit he or she did the surgery and no patient would state they had had the surgery.


Beginning in the early 1960s doctors looked more closely at what occurred to/in the face during the aging process (including the microscopic level) and what could be done to counteract those changes. They found out the skin thins, stretches and loses elasticity, functioning facial muscles create skin wrinkles or folds, non-bone tissue under the skin shrinks and droops downward and some areas of facial bone resorb or shrink back/down as well. This slow unrelenting irreversible process creates on the surface what we recognize as the aging face. For a more detailed explanation of the process see Facial Aging & Rejuvenation.

Over the next 20 years new surgical procedures appeared at a rapid rate to deal with these issues. It turned out that just removing some skin was not enough. If you relied too much on skin tightening alone the end result looked unnatural and the result did not last long enough. A combined approached of skin excision/tightening and treatment of non-bone tissue under the skin such as liposuction or suture tightening became popular. It took another 10+ years to sort through all of this to find out which methods worked best in specific patients for specific surgeons.

In the late 1990s some plastic surgeons began to try out procedures where small incisions were placed in the face &/or scalp through which endoscopes (tubes that allowed one to visualize under the skin surface without peeling the skin back) were introduced. This allowed the placement of sutures into the deeper lower facial structures. The sutures were then passed up through deeper higher facial structures in an attempt to “lift” the face. In my experience these techniques have limited applications & the lifting sutures give fleeting or temporary results. In the vast majority of cases there is excess skin that needs to be removed & this is not addressed by endoscopic approaches. The lifting sutures loosen over time as the tissue grows around them. In a few months to a year these sutures are no longer lifting anything. In order to raise these deeper tissues in a consistent long lasting fashion an incision or excision is required in those deeper tissues.

The Threadlift procedure where a barbed lifting suture was placed was popular for a short period of time before these threads were taken off the market in the United States.

The s lift refers to an s-shaped incision in front of the ear that extends under & in some cases around the back of the earlobe. The original s lift involved a skin incision in front of the ear only & excising-suturing a deeper layer of tissue to give a tightening effect without elevating much skin as a separate layer by itself. The original procedure had little or no effect on rejuvenation of the neck. This has been modified by a number of physicians to include numerous different variations of the original procedure including pulling the deeper tissue upward using a suture tightened around the cheek bone. All are basically minor facelifts performed without doing all the steps of a full face lift. I personally do not use this misleading nomenclature as it gives rise to prospective patients asking for a specific procedure rather than asking for resolution of a specific cosmetic issue they want addressed. It has also facilitated incompletely trained or incompetent physicians to advertise their performance of specific procedures. They are incapable of going over the different procedures available with the patient much less performing those procedures.

Beginning in the late 1990s with technological advances/new machines and lasers the belief that you could achieve the same result without surgery and little or no down/recovery time took hold. A lot of people bought into this and the thought was that if you just had the right machine for the right patient you would not really have to perform any surgery at all. It was as if doctors were afraid to perform the surgery and patients were afraid to have it done on themselves. Simultaneously patients were coming in at younger and younger ages so they did not need the full facelift procedure. As it turns out these younger patients received more improvement from non-surgical procedures than the older patients. They only needed parts of the original procedure anyways depending on how they were aging. Everyone is moving towards the aging face look from the moment they are born but different parts of the face are going in that direction at different speeds in different people. 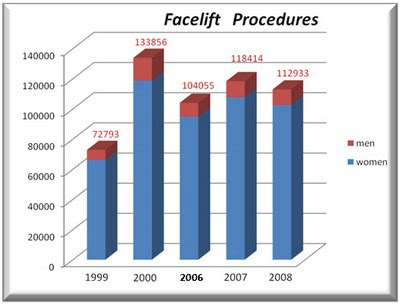 This graph is from American Society of Plastic Surgeons statistics of procedures performed. Note the consistency of about 10% of facelifts performed on men regardless of the total number of procedures performed per year. During the peak good times of the economy the number of facelifts almost doubled between 1999 and 2000 despite the increasing non-surgical partial alternatives to facelift surgery. Part of this increase may have been due to parts of the original full facelift procedure being applied to younger patients as described above increasing the total number of procedures performed. After the 2001 recession the peak number still had not been re-approached by the time of the 2007 onward recession.

Now we have so many different types of facelifts and machines for so many different types of patients that the whole process can become quite confusing. Almost no 2 surgeons will recommend the same approach for a given patient. It’s a little like the car. At one time you either bought a Model-T or you did not drive. Now you can literally choose from millions of car models worldwide. One car is not necessarily wrong for you relative to another it depends on your needs including the type of driving you do.

It is now obvious that the patient needs to be examined before surgery and the procedure tailor made to fit each specific patient’s needs. If the surgeon is too aggressive with surgery the complication rate goes up so there needs to be a balance between all of these factors to get the best result for a given amount of work/price with a workable recovery time and low risk of complications.

My next blog will cover how I approach the facelift patient and the options available to these patients including standard and subperiosteal approaches.