Nearly 5 million people are treated for skin cancer in the U.S. each year, and 1 out of 5 Americans (20% of the population) will develop a skin cancer in their lifetime. The risk of developing a skin cancer increases with immunosupression after transplants, prolonged sun exposure and prior radiation treatment of the skin. The two most common forms are basal cell carcinoma and squamous cell carcinoma. Each year melanoma, the most dangerous type, occurs in about 73,000 people in the U.S. and kills more than 9,900.

Back in 2015 Australian researchers found that of 386 patients with non-melanoma skin cancers randomized to taking 500mg Vitamin B3 (Niacin) vs. a placebo twice daily that those taking the vitamin cut their chances of developing a new skin cancer by 23% at 12 months and their chances of developing precancerous actinic keratoses by 20% at 9 months. 6 months after stopping the vitamin both groups were at equivalent risk. At that time it wasn’t clear if everyone would benefit from taking Vitamin B3 or just those with a previous history of skin cancer. Since Niacin is associated with flushing, headaches and low blood pressure so the Nicotinamide form is recommend to avoid these side effects.

Niacin cannot be directly converted to nicotinamide, but both compounds are precursors of the coenzymes nicotinamide adenine dinucleotide (NAD) and nicotinamide adenine dinucleotide phosphate (NADP). The coenzymes are required for the metabolic breakdown of fat, carbohydrate, protein and alcohol, the metabolic construction fatty acids and cholesterol and the repair of DNA. The recommended daily allowance for adults is 14 to 20mg per day. The highest concentrations are found in skipjack tuna, sesame seeds, whole grain flour, turkey, pork and venison but most grocery bought foods are fortified with niacin. Severe niacin deficiency causes pellagra, which is characterized by diarrhea, dermatitis, and dementia, as well as Casal’s necklace lesions on the lower neck, hyperpigmentation, thickening of the skin, inflammation of the mouth and tongue, digestive disturbances, amnesia, delirium, and eventually death, if left untreated. On the other hand overdoses of niacin can cause liver failure, reversible eye damage and abnormal hear rhythm. Niacin can be manufactured by the liver from the essential amino acid tryptophan.

The sun’s ultraviolet rays damage skin cell DNA and suppress the skin’s local immune system from removing abnormal cells thereby contributing to the onset of skin cancer. Vitamin B3 counteracts both of these ultraviolet ray reactions. In animal models and in vitro, niacin produces marked anti-inflammatory effects in a variety of tissues – including the brain, gastrointestinal tract, skin, and vascular tissue. Since 2015 in vitro studies conducted with melanocytes (skin pigment cells) and melanoma cells have shown that nicotinamide has the same effect on these cells. Randomized placebo-controlled trials are now planned to determine the efficacy and safety of nicotinamide for melanoma prevention in high-risk patients. 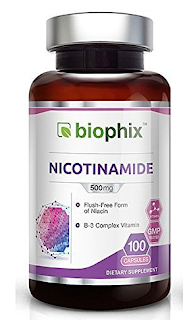 Rhinoplasty - Nose SurgeryCosmetic Surgery in Patients Taking Steroi...Redo Tummy Tuck11 Reasons for Not Having Plastic SurgeryTreatment of Scars, Moles, Age SpotsBody ContouringCosmetic Surgery for Men Increased in 2010Dynamic vs. Static WrinklesCountries where plastic surgery is most po...Skin Bleaching
This website uses cookies to improve your experience. We'll assume you're ok with this, but you can opt-out if you wish. Cookie settingsACCEPT
Privacy & Cookies Policy