Keloids are the overgrowth of scar tissue in response to skin injury or irritation. They frequently persist at the site of injury, often recur after surgical removal and overgrow the boundaries of the original wound. They can itch, be painful, restrict movement, interfere with sleep, block a vital function like hearing and cause cosmetic disfigurement with significant psychological effects. The usual treatments of surgery, radiation, cryotherapy and injections can be costly and time consuming.

The Division of Bioengineering, School of Chemical and Biomedical Engineering, Nanyang Technological University, in Singapore has just developed a new treatment modality that could make it easier and cheaper to treat this problem. They combined a microneedle transdermal delivery system with medications like 5-fluorouracil that have been used to treat keloids. The system consists of a flexible patch, containing microneedles 0.7 to 0.9mm in length and 1/3 mm in diameter, that is applied to the skin. The microneedles are loaded with the drug, 5-fluoro-uracil (5-FU) in a solid form. The patches are flexible so they can adjust to surface contour. The microneedles penetrate the superficial skin and swell on exposure to tissue moisture opening pores along their surface that release the drug. The release is slow and sustained rather than a sudden release of the drug. The 5-FU concentration in each patch can be varied as needed. Their price points on the product are in the range of 20 cents per patch and their goal is for patients to treat themselves replacing the patch every 12 hours without ever seeing a doctor. 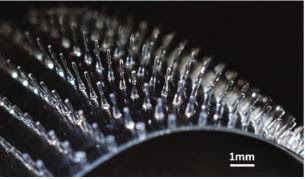 So far they have only proven the patch can be applied to pig skin, the medication is delivered over time and the product stops keloid cell proliferation in petri dishes containing such cells..
Trials in human beings have not begin so we are no way near FDA approval. We do not even know what the optimal doseage for these patches should be in different patients.The 5-FU has the potential to leave you with an open wound where the keloid once was. Therefore, I cannot see the FDA allowing a chemotherapy agent like 5-FU to be used by patients without a doctor prescription or supervision.