The link between smoking and premature facial aging was first made in 1971. Surveys of twins attending the annual Twin Days Festival, held in Twinsburg, Ohio between 2007 and 2010 conducted by Case Western Reserve University department of Plastic Surgery have corroborated this. In each pair of twins, either one twin smoked and the other did not, or one twin smoked at least five years longer. Pairs in which neither smoked or the difference in smoking was less than 5 years were excluded.Fifty-seven of the included 79 twin pairs studied were women, and the average age was 48. The twins completed questionnaires regarding their medical and lifestyle histories specifically sunscreen use, alcohol intake, work stress and smoking history. A professional photographer took standardized, close-up photographs of each twin’s face. Without knowledge of the twins’ smoking history, plastic surgeons then analyzed the twins’ facial features in the photos, including grading of wrinkles and age-related facial features to identify “specific components of facial aging” that were affected by smoking. 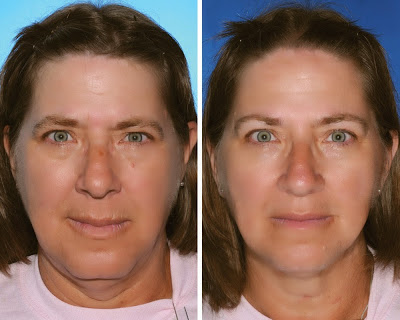 The conclusion of the study was that the effects of smoking on facial aging are most apparent in the lower two-thirds of the face specifically lower eyelid bags, malar bags, upper eyelid skin excess, the lips, laugh lines and jowls.  The forehead wrinkles, frown lines and crow’s feet wrinkles were not statistically different.  Smokers had more sagging of the upper eyelids, as well as more bags of the lower eyelids and under the eyes. Twins who smoked also had higher scores for facial wrinkles, including more pronounced nasolabial folds, wrinkling of the upper and lower lips and sagging jowls. I had once had a patient who smoked only holding the cigarette on the right side of her mouth. She had aging wrinkles of the right upper lip but not of the left upper lip. In her case one side of her face aged more than the other.
The take home message is do not smoke to lessen the need for cosmetic surgery and do not smoke afterward to maintain the results of cosmetic surgery for a longer period of time.
Dr. Aaron Stone – Plastic Surgeon Los Angeles
Dr. Stone’s Twitter