Faces that are considered youthful and attractive in general have certain proportions and relationships in common. These fall into 3 categories.

The optimal values for the first 2 categories are the same for both sexes. The third category can be altered to achieve a more masculine or feminine look. In assessing a patient for facial surgery Plastic Surgeons must keep these proportions in mind in the process of deciding what specific operative procedures would benefit the patient. This also allows the surgeon to custom tailor the procedure for each patient. No 2 patients should have the exact same procedure unless maybe they are identical twins. This is especially important when the margin of error is small such as a rhinoplasty where the margin of error is a millimeter or less. 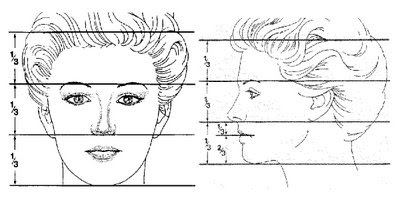 The balanced facial proportion is equivalent upper, middle and lower thirds as shown here with a U-shaped or V-shaped outline of the face and lower jaw as shown here. Also the upper lip is 1/3 the height of the lower face with the chin-lower lip making up the other 2/3. This 1/3 to 2/3 relationship is very common in human body structure. It is present from the relative length of finger bones to relative sizes of parts of the nose. For some structures there is an equivalent size relationship as well. 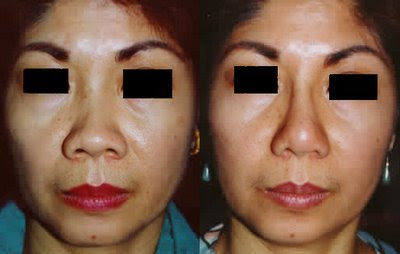 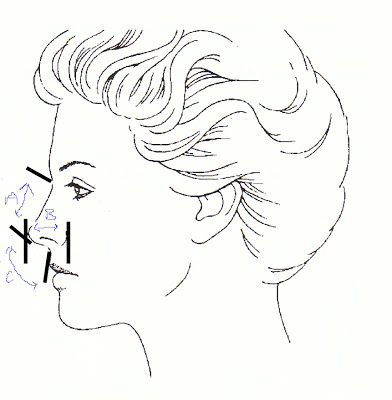 Here we again see the 1/3 relationship of B to the 2/3 relationship of A. C represents the angle between the 2 lines. For women the desired angle is 102 to 115 degrees. For a more masculine appearance the angle should be 95 to 105 degrees. The other aspects of the masculine face are square jaw and chin, a pyramid shaped nasal bridge outline, bossing of the forehead bone above the eyebrows and a more horizontal eyebrow outline. 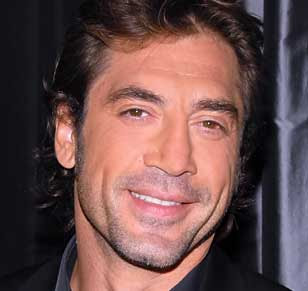 In contrast to the female picture above the masculine features shown here are a more square chin and jawline, more horizontal eyebrow outline, bossing of the forehead bone above the eyebrows, pyramid shaped nasal bridge outline, a smaller nasal tip angle to the upper lip and of course more facial hair. 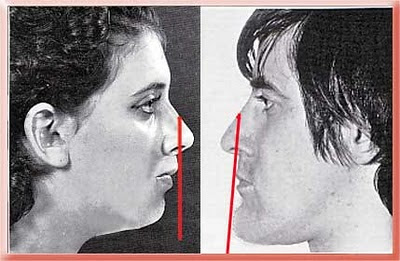 On a side view you can see that the female chin lies 2 to 5mm behind a tangent line from the mid-nasal bridge to the upper lip. The male chin touches that line or comes close to it.

If you consult with a surgeon for possible facial surgery make sure they do at least a rudimentary facial proportion analysis especially prior to cosmetic nasal surgery. If they fail to do so and show you the actual numbers along with a plan of action it would be best if you look elsewhere for your surgeon.