The first injectable filler available in the United States was Zyderm I. It was approved by the FDA in 1981 for injection into skin folds and wrinkles related to the aging process or depressed skin scars. Zyderm II followed in 1983 and Zyplast in 1985. They were all basically collagen derived from cow hide. Each form was designed for injection at a different depth within the skin. The chemical composition of each differed slightly so they lasted for a variable number of months, usually 2 to 3 months. Aside from their temporary effect the other major drawback to their use was the need for skin testing. A small amount was injected under the skin and if the patient did not react to the material they could go ahead with a full treatment some weeks after the skin test. If the full treatment was given to someone who was sensitive/allergic severe allergic reactions could result including the loss of the skin over the injection site.

In 1999 to 2000 other collagen based materials derived from human organ donors were used to make Cymetra and Fascian injectable fillers. Because of their thickness they were difficult to inject through a small needle so they were quickly replaced by newer products.

The Zyderm family was essentially replaced by Cosmoderm I and II and Cosmoplast which were FDA approved in March 2003. This collagen was produced by human tissue cells basically in an industrialized petri dish setting. It did not require skin testing and lasted 3 to 6 months. Patients could now be injected at their first office visit. It was a definite improvement over the Zyderm family of fillers.

Restylane was FDA approved in December 2003 and was something of a breakthrough. Unlike collagen which was a protein that differed between species this was a hyaluronate compound equivalent to joint fluid. It did not differ between species so their was no need for allergy/skin testing and it lasted longer, 6 to 12 months. The only apparent drawback was greater swelling because the material absorbs water. For injection into different depths there was Restylane, Restylane Fine Lines and Perlane.

Restylane was so commercially successful that a slew of competing fillers based on the same chemical structure appeared-Captique, Hylaform, Purogen etc. The manufacturing process and degree of crosslinking between component molecules differed in each formulation. Each company said theirs was better than the others but none had the commercial success of Restylane mostly for marketing reasons.

The next generation of injectable fillers was designed with the goal of having the material last longer than any of the previous products or even be permanent.

The first product was Radiance and the name was later changed to Radiesse. This is round particles of calcium hydroxyapatite (a natural mineral bone like material normally present in the body) floating in a gel. Because of its simple chemical mineral structure it is non-allergenic so no skin tests are needed and because of the particle size it can last 2 or more years after injection. Because of the way it handles and feels it should be injected into deeper layers just below the skin. The prefilled syringes are filled with 70% gel so additional injection fine tuning is usually required as the gel is absorbed in the first few days.

Radiesse Injections to the Nasolabial Folds 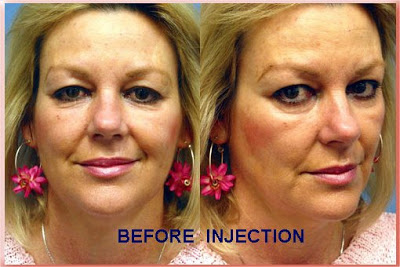 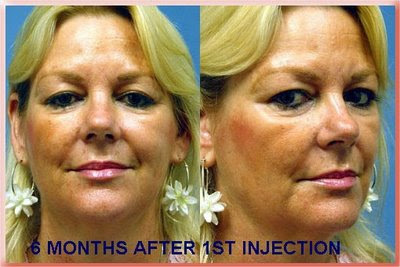 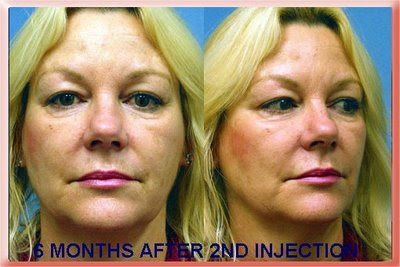 6 Months After Second Injection
Sculptra is made of absorbable plastic, the same material that absorbable sutures and bone screws are made of. The powder is mixed with local anesthetic and sterile water and then must sit for about 2 days before it is injected. The injection has to be made deep under the skin. The body then reacts to it and manufactures soft tissue to fill the defect. That is why less that what is needed to achieve the result is injected and the patient returns every 1 to 3 months for additional injections as needed until the desired amount of filling has been achieved. The effect lasts 1 to 2 years and in some reports as long as 5 years. In 2004 It was FDA approved for the treatment of the loss of facial fat associated with HIV. The result feels softer than Radiesse but if injected too close to the surface there is a greater incidence of it forming reactive lumps (granulomas). More recently it has been FDA approved to treat the loss of facial fat that occurs as part of the aging process (For a more detailed explanation of the process see Facial Aging & Rejuvenation).

Sculptra Before and After 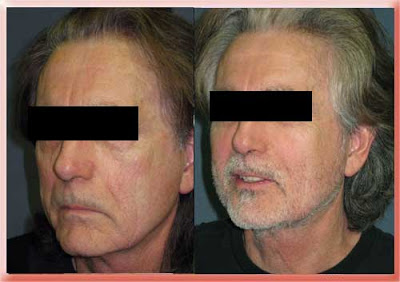 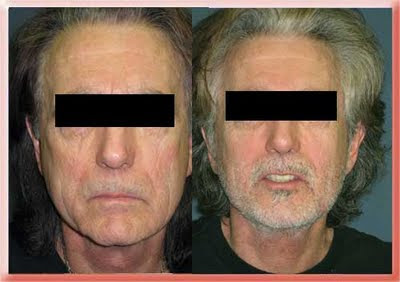 Before and 9 Months After Sculptra Injections to the Cheeks
Artecoll or Artefill is a mixture of collagen from cow hide and microscopically small plastic spheres (polymethylmethacrylate). The collagen is absorbed over 1 to 3 months and is gradually replaced by tissue created by the body in response to the spheres. The result then lasts for up to 2 years and may be permanent. Drawbacks to its use are the need for skin testing and the tendency for it to clump or form lumps if injected too close to the surface. This can be particularly problematic given how long the material stays in place.

In 2009 Selphyl was introduced. This involves taking a small sample of blood from the patient mixing it in a test tube to separate blood components, which takes about 20 minutes and then injecting some of the components into the area to be filled. Your body then makes collagen to fill the depression or fold. The process takes about 3 weeks from the date of injection to become visible. The advantage is no foreign material or animal derived chemicals are injected. It is supposed to last 12 or more months. Isolagen is similar in that a biopsy of the patient’s skin is cultured to produce more fibroblast cells. These cells are then injected back into the patient where they are supposed to produce more collagen. It is this collagen that is expected to efface wrinkles, rejuvenate the skin etc. I have not had much experience with either of these. Therapies like these that are based on the patient’s own cells can be more complicated and expensive to administer than those that come in one-dose-fits-all vials or pre-loaded syringes.

The continual search for new products for soft-tissue augmentation has in recent years led to the introduction of long lasting alternatives to hyaluronic acids and collagen that are composed of other polymers able to improve clinical persistence over time. These include sodium carboxymethyl cellulose (CMC) which has been chemically treated by the cross-linking process and thus used as a hydrogel for soft-tissue augmentation through injection with thin needles. It is very new and its safety, efficacy and ideal patient candidates is not yet clear.

Any injectable filler can have short term undesired effects shortly after injection or medium term undesired effects some weeks or months after injection. Bruising, redness, swelling, over correction and under correction can become visible within days of injection. Lumps can appear if the filler is injected too close to the surface or if the doctor’s finger is too forceful on the syringe. These can usually be massaged down if addressed right away. Nodules that are appear several weeks after injection are due a reaction to the injected filler. If ignored they can continue to grow. The treatment is massage, injection of a corticosteroid and if necessary surgical removal of the filler. Needle puncture and manual squeezing out of the filler is preferred to cutting with a scalpel and removal because the latter has a tendency to create dents or defects.

One of my patients had a hyaluronate injected into her lips in the middle east. She had diffuse increasing lip swelling beginning a few weeks after surgery until she saw me some months later. Within a week after corticosteroid injection and removal of some of the material through a needle puncture her lips were normal. Another patient had silicone injected into her lips in Russia. She did well for some years and then had dental work. The device used to hold her mouth open pushed the silicone that was diffusely distributed into a few lumps. I was able to remove almost all of it through a few small incisions that healed very nicely and the patient was very happy.

In the United States silicone injection is only FDA approved in eye surgery for procedures like the treatment of a detached retina. It is not approved for the injection of wrinkles or skin folds. It was injected for such purposes in the 1960s and 1970s with disastrous results. The fluidity of the silicone gel allowed it to migrate from the injection site, gather into lumps and wrap around nerves. Surgical removal of the silicone was difficult to impossible. This led to a ban of silicone for this use in the US. Technological advances that allow injection of very small (micro)droplets of silicone have emboldened some physicians to revisit the procedure but the ban is still in effect. I personally would not go near that procedure. 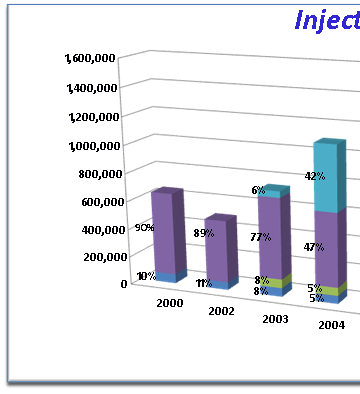 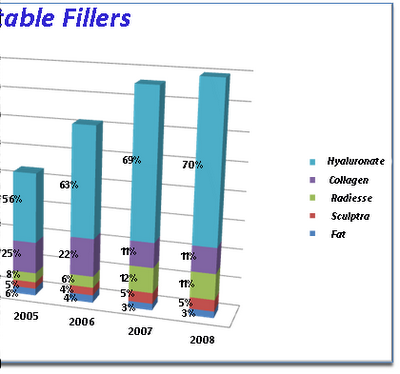 This is a graph of American Society of Plastic Surgeons statistics on the number of injections made per year by surgeon members. Note the almost 3 fold increase in the total number of filler injections between 2000 and 2008. The total number of free fat grafts is about the same throughout though they make up a smaller percentage of the total more recently. The total amount of collagen injected is now less than half of what is in 2000 when the other alternatives were not available. Since their debut in 2003 the hyaluronates have become the number one injectable filler in the United States. Radiesse use has tripled since 2003 so that in 2008 the same number of patients had Radiesse injections as had Collagen injections.

Rhinoplasty - Nose SurgeryLaser Skin Resurfacing - Skin Wrinkle Remo...LaserFacelift, Midfacelift and Neck Lift 1Keloid - ChestFacial Proportions - Facial Analysis in Co...Dark Circles Under the EyesTreatment of Vitiligo, Hypopigmentation an...Liposuction and its variants tumescent lip...Fat Grafting vs. Chin Implant
This website uses cookies to improve your experience. We'll assume you're ok with this, but you can opt-out if you wish. Cookie settingsACCEPT
Privacy & Cookies Policy