As described in my previous blog Hidradenitis of the Armpits Hidradenitis occurs when a plug of dead skin in the duct of a gland emptying into a hair follicle initiates an infectious process as bacteria multiply within the plugged gland. As the gland swells a boil becomes visible. The obstructed gland or boil ruptures into the deep layers of the skin; adjacent glands become involved; and abscesses form. Subsequently, multiple draining sinuses or holes appear on the skin surface and the whole hair bearing area may become inflamed. Such inflammation may result in star shaped skin scars and tunneling, causing ridging of the skin. The association of Hidradenitis with hair follicles has fed the notion that removal of this hair early in the process can cure or ameliorate Hidradenitis. Since the 1990s laser treatment to remove unwanted hair has become increasingly popular therefore such treatments should to some degree treat Hidradenitis.

A laser is basically a container of some medium (such as a liquid dye, gas, etc) into which an electrical charge  or flash of light is introduced. The charge or flash excites electrons in the material at the molecular level and the material gives off a narrow band width of light as the electrons come out of excitation. The exact wavelength of light created depends on the material itself and the characteristics of the charge or flash. Mirrors inside the container bounce the light around to create a chain reaction of molecular excitation and the emitted light is allowed to escape through a pinhole. This single wavelength coherent light is then focused down into a hand piece so it can be applied to tissue. The effect on the tissues depends on which tissue components absorb the specific wavelength of light, the depth into the the tissue that the laser can penetrate, the duration of exposure to the light (pulse width), the power of the light at the point of tissue contact, etc. 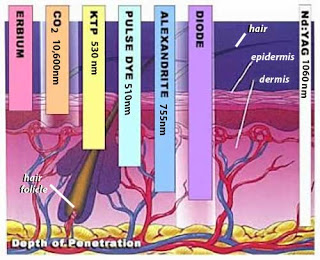 Light is absorbed by dark objects. Color as we perceive is really reflection of light at wavelength that corresponds to the color we see. If there’s enough light, something dark can get pretty hot (like the hood of a black car in the summer sun). In a similar way, laser energy is absorbed by specific tissue components creating heat at the target point. This dark target matter, or chromophore, can be naturally-occurring such as natural hair color or artificially introduced such as a tattoo. The 1064nm laser is optimal for reaching the hair follicle depth and absorption by darker pigment. This is complicated by the fact that hairs in any given treatment area can be widely variable in diameter, color, and depth. Some follicles can be as deep as 7mm below the skin surface. The other problem is that red, blonde, grey and white hairs do not absorb this wavelength. In such cases carbon, can be introduced into the follicle by rubbing a carbon-based lotion into the skin following waxing thereby creating something right near the follicle that can absorb the laser light.

To thermally destroy the hair follicle without harming the surrounding skin tissue, the laser has to target the melanin pigment in the hair follicle with a specific wavelength in the 600-1100nm range and the target hair has to cool before it is hit with a second laser pulse in order to minimize collateral skin damage. The hair has to be heated to 65 degrees C in order to be removed while the skin is damaged at heats above 44 degrees C. 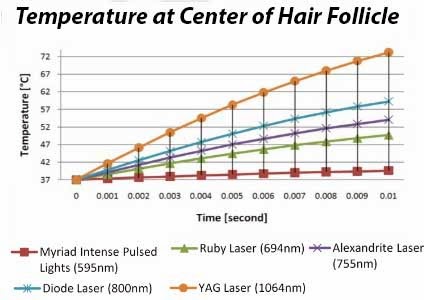 From these 2 figures it is clear that the YAG laser is best for reaching the follicle and heating it up to the appropriate temperature. The problem again is that 1064nm is reflected (not absorbed) by lighter colored hair. The other problem is that the pigment if darker colored skin will also absorb the light as it passes through and once that skin heats up above 44 degrees C it is damaged i.e. burned. In such cases cooling of the skin surface at the same time is important. Another technical safety point is setting the time between laser pulses to allow for skin cooling but not hair follicle cooling as the skin cools more quickly than the follicle.

Most doctors space laser treatments 4 to 6 weeks apart, but theoretically, there is a point of diminishing return where additional treatments will not cause additional hair loss.

CO2 lasers
have been used treat Hidradenitis as early as 1987 but these are ablative leaving wounds that take time to heal. For small areas these heal with small recurrence rates but for large areas the healing process could take months and result in bad scarring that could be symptomatic or hamper range of motion. The use of fractional CO2 lasers in Hidradenitis has not been studied.

800 nm and 1450 nm Diode Lasers have effectively been used for laser hair removal but I have only been able to find a couple of anecdotal single case reports of their use in treating Hidradenitis.

Broad band or intense pulsed light (IPL) is a strobe light of multiple wavelengths that generates skin surface heat when it hits the skin surface. It also kills bacteria. Filters can be placed between the light source and the target so that the target only sees a specific wavelength. This is basically the poor man’s laser but has been effective in hair removal, skin rejuvenation, reducing sun damage to the skin, evening out skin pigmentation and acne treatment depending on the settings.  In a 2011 study 18  Hurley stage II and III patients received a total of eight 420nm IPL treatments, twice weekly for 4 weeks, to one side of their body. The treated sides were then compared to the non-treated sides.They found that the Hidradenitis Suppurativa Examination Scoring System improved by 56% at 3 months after treatment, 44% at 6 months after treatment and 33% at 12 months. This is clearly not a permanent solution for mid and advanced stage Hidradenitis and improvement in a scoring system is not equal to a cure. 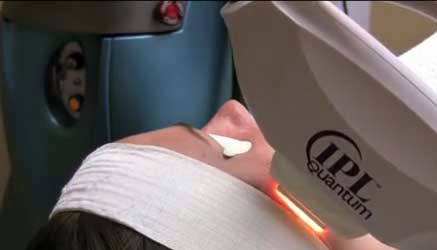 Neodymium-doped Yttrium Aluminium Garnet (Nd:YAG) laser  as I have shown above is quite effective for hair removal. The most quoted report of its use in Hidradenitis is the 2010 study by Xu LY et al. Two laser treatments were performed in 22 patients with Hurley stage II Hidradenitis in a randomized right left fashion. Double pulse stacking was used at the first treatment, and triple pulse stacking at the second on inflamed areas. These patients were examined 24 hours,1 week, 1 month, and 2 months after treatment. Lesion Area and Severity Index scores modified for HS, patients improved 32% in treated areas 2 months after the second treatment. Biopsies proved the hair follicles and shafts were affected and the areas were scarred by the laser. This was not a cure although there was some improvement and the follow up was only 2 months so it unclear how long the result lasted.. The
presence of darker thicker hairs in the armpit than in the breast crease may be the reason for this.

Another study by Tierney et al involved 22 patients (skin types II-VI) with Hurley stage II / III hidradenitis suppurativa on both sides of the body. One side was treated with only topical antibiotics and the other with 4 monthly Nd:YAG laser treatments. 2 months after the last treatment laser treatment improved the modified HISERG scale by the greatest amount for groin HS (68% vs. 2%) but also improved HISERG scale scores of lesions in the armpit (63%  vs. −11%) and in the breast creases (30% vs. −71%). The -% means the non-lasered side became worse. This probably due to the presence of darker thicker hairs in the armpit than in the breast crease.

A 2012 study reported a 2 step process first using Nd:YAG to destroy the hair follicles and then applying a CO2 laser to remove surface skin in 4 patients. At 3 year follow up there was no recurrence. It is unclear how advanced their HS was to begin with or whether the CO2 really added anything to the treatment results.

A 2013 review of laser treatments performed at the Birmingham England Regional Skin Laser Centre between 2003 and 2011 concluded that laser hair removal “appeared” effective in treating HS particularly at an early stage.

Nd:YAG is your best option for laser hair removal treatment of HS, it works best in areas with thicker darker hair (it’s not worth the effort for breast and chest HS), it is more likely to reduce severity or prevent progression of severity than it is to cure HS, you may need future maintenance laser treatments after the initial treatments, one laser treatment is never enough and it will not do much for advanced stage III HS where the problem is well beyond the hair follicle.