Grafts of small pieces of fat removed from one area of the body and placed in another area was first attempted in the late 1800s and early 1900s. These were used as padding between 2 surfaces in the body, plugs to stop bleeding, to fill out indented areas for cosmetic reasons, etc. The main difficulty was getting the fat to survive as larger blobs of fat would die before any blood vessels could grow into them. More than half of the implanted fat would disappear so early proponents of this would put more fat in place than they needed. That way they would end up with the right amount of fat after blood vessels finished growing into the fat and no more fat would die. In order to make the fat easier to work with (structurally more durable) and add some bulk to the graft a thin layer of deep skin layers were left attached to the fat grafts. These are called dermal fat grafts. Unfortunately this does not make more of the graft survive. Also those grafted tissues that do not survive tend to turn into scar tissue that may be seen and/or felt leading to a poor cosmetic result.

Over many years it was noted that graft survival was better in younger patients and when the grafts were placed in areas of higher blood flow like the face or directly into a muscle. Some doctors would treat the harvested fat with insulin or other concoctions before implanting it to improve survival but the validity of these treatments was never really proven.

The greatest advance was in the 1960s when plastic surgeons began reattaching amputated body parts and moving large pieces of tissue from one area to another by attaching blood vessels under the microscope. This was appropriately called microsurgery. The draw back to this technique was the amount of resources required in terms of personnel, training and equipment to perform the surgery. This made it prohibitively expensive for your run of the mill non-insurance covered cosmetic surgery or those procedures that required a relatively smaller amount of fat.

With the introduction of liposuction in the 1980s there was now an almost unlimited supply fat that could be harvested and grafted by merely injecting it though a needle or narrow metal tube.

Beginning in the early 1990s advances in methodology dramatically increased the survival of these fat grafts and structural fat grafting was born. This was thought to be primarily due to less damage to the fat during harvesting. It seems that survival of the fat grafts is highly dependent on the surgeon and the surgical technique he/she uses.

Currently fat grafts are frequently used either as stand alone procedures or added on to other procedures to correct defects after surgery or trauma, augment areas for cosmetic reasons (such as the lips and buttocks) and rejuvenation (to make appear younger) of the areas being treated (such as the face and hands). Certainly properly performed fat grafting to the buttocks is a safer and overall better operation than placing buttock silicone implants. Problem areas for fat grafting are around the eyes where they tend to lump and become unsightly though some surgeons claim good results in these areas. Another problem area is the breasts and injecting fat for breast augmentation instead of using breast implants, breast Lipomodeling. There having been conflicting studies published on the effects of doing so. Some say this creates mammograms suspicious for breast cancer and that leads to unnecessary breast biopsies. Others say that this is not the case. They are probably both right in that it depends on how the procedure was done. Once it is clear what methodology is the best I think this procedure will become much more popular although it will never be for everyone. The case for free fat grafting in reconstruction after breast cancer is much clearer. In the case of lumpectomy and radiation or mastectomy and radiation is has been clearly shown that free fat grafting reverses some of the radiation injury to the chest skin and makes the use of breast implants in these patients safer and more reliable.

Stem cell facelift is just a facelift with the injection of liposuctioned fat from elsewhere on the body. Proponents of this approach emphasize “stem cell” because everyone has stem cells in the fat and for marketing reasons. The regular measures employed to maximize the survival of injected fat will preserve the stem cells in that fat. I just use the term free fat grafting as more complicated terms just obscure what is actually being done.

There is recent anecdotal evidence or case descriptions of using these fat grafts to treat radiation injury to the skin after breast or head and neck cancer surgery. It reportedly makes the skin softer and more durable. There are also reports of the cutting of the fibrous bands in Dupuytren’s disease of the hands and then injecting fat grafts to prevent rejoining of the bands. Lastly, some doctors have used the Brava suction bra system to stretch the breasts after breast cancer surgery and then injected fat grafts to maintain the bulk thereby regrowing breasts. These procedures will require more scientific examination before they can become mainstream.

No matter where you put grafted fat it may not take or survive and can partially or completely disappear. On the other hand it can grow with age and weight gain making an initially good result look not quite so good, especially if the fat was was taken from areas where the body concentrates fat like the hips and lower abdomen.

Fat grafting for facial rejuvenation in conjunction with a facelift 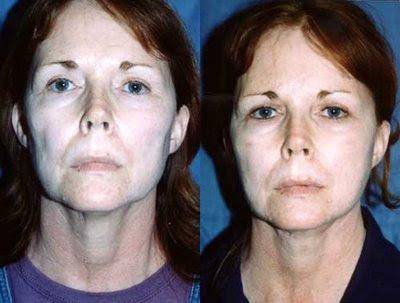 42 year old patient had 11 cc of fat injected into each hand. The after photo was taken 3 years later proving that the fat survives and maintains its shape for years.

Fat grafting for buttock augmentation instead of buttock implants 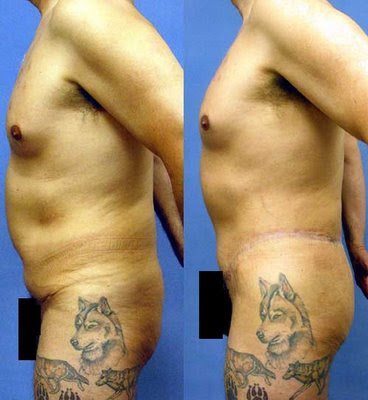 Addendum October 10, 2012:
Lesley Kelly of Glasgow, Scotland, fell into a bathtub filled with hot water that scorched most of the right side of her body at the age of 2. She had third-degree burns that stretched over 60 percent of her body and lost full range of motion around many of her joints. She underwent numerous surgeries through the years to remove scar tissue, but the scar tissue continued to grow back and the appearance of her scars did not improve.

In 2011, 40 years after the initial burn, surgeons removed scar tissue from the elbow, used liposuction to remove fat from the waist, separated stem cells from the fat injected those cells into her elbow. The whole surgery took 2 hours and within months she regained 40 degrees of motion at the elbow. 40 degrees that were lost 40 years earlier. 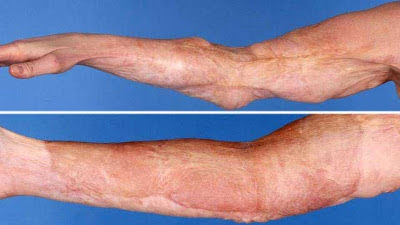 This stem cell therapy, approved in the U.K. to treat soft tissue wounds, is now gaining traction in the U.S. where there are an estimated 50,000 to 70,000 burn cases each year. Cytori Therapeutics, Inc., the biotechnology company that created the therapy, has been awarded a $4.7 million U.S. government contract to further develop the stem-cell treatment for thermal or radioactive burns. For the first two years, the research will evaluate the therapy in animals before it can be tested clinically in humans.

Addendum July 2, 2013:
Of 456 plastic surgeons responding to an ASPS Member Surgeons survey only 70 of the surgeons reported ever performing fat grafting to the breast. Of these 70 the majority (88%) use fat grafting as part of their breast reconstruction often doing fat grafting along with implants or flap procedures.

Cosmetic Surgery for Asian PatientsCountries where plastic surgery is most po...Correction Pectus Excavatum - Funnel ChestBelt Lipectomy 2Body Dysmorphic Disorder - BDD and Plastic...11 Reasons for Not Having Plastic SurgeryAfter Massive Weight LossNew US Federal Tax on Cosmetic SurgeryVitamin B3 Prevents Skin CancerThe Internal Bra Breast Lift
This website uses cookies to improve your experience. We'll assume you're ok with this, but you can opt-out if you wish. Cookie settingsACCEPT
Privacy & Cookies Policy