In my previous blog Brazilian Butt Lift – Buttock Augmentation Implants and Injections I discussed the history of buttock augmentation, the surgery and illegal buttock injections by untrained individuals leading to loss of life. According to statistics from the American Society for Aesthetic Plastic Surgery (ASAPS) plastic surgeons, dermatologists, and facial plastic surgeons performed 18,487 of these procedures in the US in 2015 compared to 7,382 in 2011, a 150% increase over 4 years. The total from 2011 through 2015 is estimated at over 65,000. If other surgeons are included the 2015 total could have been as high as 23,000 and the 2011 through 2015 numbers as high as 100,000. In 2015 a buttock procedure (fat grafting, buttock implant or buttock lift) was performed in the US every 30 minutes of every day. Now as the procedure becomes increasingly popular with surgeons it has become obvious that this is the mostly deadly procedure performed by plastic and cosmetic surgeons.

To investigate this ASAPS created a task force, which surveyed, queried and interviewed medical malpractice carriers, state medical boards, individual plastic surgeons world wide, American medical examiners and U.S. autopsy reports in July 2016. 25 deaths associated with the procedure were confirmed by individual surgeons and medical examiners over the previous 5 years. 4 deaths were reported between 2014 and 2015 by the American office operating room accreditation entity AAAASF. That translates to 1 death every 2 to 3 months from this procedure. The very first case report of death following buttock fat injection due to fat travelling to the lungs (pulmonary fat embolization-PFE) was published in the pathology literature in 2015. I am also aware of deaths from the procedure due to puncture of large arteries or bowel with the metal tubes used to harvest or inject the fat. The ASAPS task force consisted of 11 surgeons, pathologists, and statisticians who limited their study to the risks of both fatal and nonfatal fat embolization. Most non-fatal fat embolization cases require a stay in the intensive care unit on a ventilator breathing machine and may result in permanent lung impairment.

The queried surgeons accounted for a career total of 198,857 cases. In this group there were 32 fatal and 103 non-fatal fat embolization cases. Over the previous 12 months (July 2015 to July 2016) this group had performed 17,519 cases resulting in 5 fatal and 12 nonfatal pulmonary fat embolization cases. That is almost 1 death every 2 months and 1 case requiring hospitalization in the intensive care unit per month. Surgeon experience i.e. number of cases performed was not statistically related to the number of pulmonary fat embolization cases. About half of the surgeons reported having performed 50 or fewer cases. The technique used/described by the surgeon though was statistically associated with increased risk of having either complication. 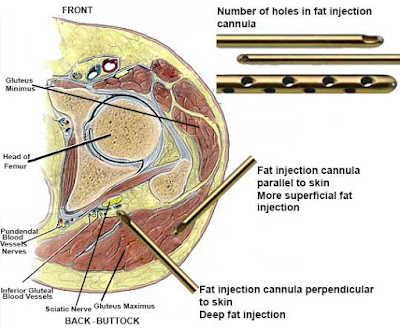 Autopsies on only 2 patients out of 22 Brazilian Butt Lift deaths in Mexico and Columbia showed disruption of the blood vessels deep to the gluteus maximus muscle, which could explain how fat traveled via those veins from the buttocks to the lungs.

Clearly deep buttock fat injections are problematic with 4 to 6 fold increases in fat emboli complications but fatal PFE have been reported with superficial injection as well. A 2016 review of the medical literature yielded 17 case studies and 2 retrospective reviews totaling over 4,000 patients where 46.7% of the articles recommended fat injection into the fat and muscle layers of the buttock, 26.7% recommended injection only into the muscle and 26.7% recommended injection only superficial to the muscle. This leaves us with more questions than answers. Do the surgeons really know the level or depth of their fat injections? Do the size of fat particles injected, total amount of fat injected, patient position on the operating table, syringe vs. ratchet gun injection and/or the entry site of the injection cannula make a difference? Does a small percentage of the population have an anatomical anomaly that predisposes them to this? Does injecting while the cannula is moving outward rather than inward make a difference? 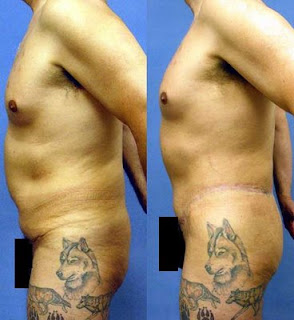 This is a patient of mine in whom I performed fat grafting to the buttocks at the same time as a body lift. You can estimate the amount of skin removed by the size of the dog’s head. 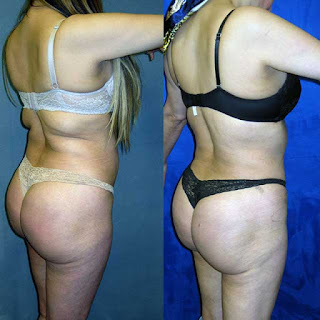 ProceduresThe Dangers of Sun ExposurePartial Rib Removal - Rib ShaveRedo Tummy TuckThe difference between panniculectomy and ...RadiesseBrowlift - ForeheadplastyVampire Facelift is Really a Face Fill#Hidradenitis of the Armpits - Boils Under...Eyelid Bumps
This website uses cookies to improve your experience. We'll assume you're ok with this, but you can opt-out if you wish. Cookie settingsACCEPT
Privacy & Cookies Policy