Pain control during surgery has been quite good for a number of decades. Refinements in recovery from anesthesia to lower the incidence of nausea, shaking etc. after surgery have been accomplished by adjusting the mix of anesthetics used and employing newer medications like propofol, toradol, zofran etc. More recently the focus has been on controlling pain after surgery to lessen the need for narcotics, shorten recovery times after surgery and improve surgical results in general. The opioid narcotic medications commonly used can become addictive, have small windows between effective and overdosing quantities that affect breathing and tend to be constipating.

Local anesthetics have been in regular use since the late 1800s. Most people currently get their exposure to them at the dentist office where novocaine also called lidocaine is injected prior to dental work. The onset and duration of action varies between different local anesthetics. Novocaine is one of the quickest onset and shortest acting local anesthetics. About 10 years ago surgeons began using longer acting bupivacaine applied via external pumps and tubes like the on-Q system to the operative site as a means of pain control after surgery. 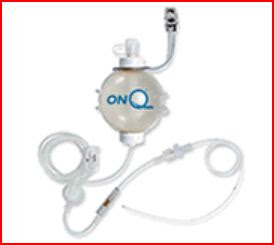 The thought was that slow constant administration of a long acting local anesthetic to the operative site would allow for a quicker recovery after surgery, allow the patient to get up and around earlier and decrease the need for narcotic pain killers after surgery. Their use became especially popular with orthopedic surgeons who would place the catheters directly over bones or into joint spaces after surgery (such as knee or shoulder surgery) and to a lesser extent with general and thoracic surgeons. In 2007 it was discovered that prolonged exposure of joints to local anesthetic caused permanent loss of cartilage in the shoulder joint and multiple lawsuits have been filed since. Currently, there is no effective treatment for cartilage loss; patients who have experienced it have required additional diagnostic and therapeutic procedures and some required arthroplasty or shoulder replacement. Use among plastic surgeons was more limited and confined mostly to tummy tuck and breast surgery patients to decrease reliance on pain medications and allow for earlier ambulation after surgery. I tried this in the past on tummy tuck patients and was unimpressed by its ability to do either so I stopped doing it.

In October, 2011 the FDA approved Exparel which has just recently become available for public use. Exparel is long acting bupivacaine that has been placed in a container of microscopic fat cells. The anesthetic is then slowly released from the fat cell container into the body after injection. This extends the effectiveness of the anesthetic from a few hours up to 3 days. EXPAREL is the first and only multivesicular liposome-based local anesthetic that can be used around surgery in the same fashion as current local anesthetics. The medication is injected near the end of surgery and should not be injected with other local anesthetics at the same time as that could result in sudden release of all of the anesthetic from the fat cell containers. In clinical studies exparel was most effective in the first 24 hours after surgery. The fat cell containers can be damaged by contact with the liquid antiseptics commonly used just prior to surgery.

Due to the large surface areas involved in body contouring surgery like breast surgery and abdominoplasty I suspect this medication will prove most useful for rhinoplasty, facial implant, ear and hand surgery. It will be especially useful for carpal tunnel and cubital tunnel surgery. Clinical studies have shown this medication to be most effective in the first 24 hours after surgery and to significantly reduce the need for narcotic pain medications after surgery. The main problem in using it is one vial of EXPAREL costs $285 while one vial of Bupivacaine costs $5. I cannot afford to pay that out of my pocket so patient’s or hospitals will have to pay for it in my patients.

I think we will see many more fat cell packaged medications in the future.

The cream uses a proprietary phase-changing technology to form a pliable peel on the skin when exposed to air. This is an improvement over previously applied topical anesthetic which required placement of the medication an hour or more before the procedure and a saran wrap like covering to ensure penetration and prevent evaporation. Pliaglis is applied for 20 to 30 minutes for most procedures, and for up to 60 minutes for more potentially painful procedures. Pliaglis® is available for patients exclusively through offices of licensed medical professionals.To avoid toxicity it should only be applied to up to 400 cm2 of intact skin for no more than 60 minutes.