This is a guest post by Valerie Johnston, a health and fitness writer located in East Texas.

Can your makeup kill you?
At the very least it can make you very sick, according to recent FDA investigations that have discovered toxic levels of mercury and other heavy metals in a number of imported skin creams and makeup products.

The good news is that so far no mercury has been found in American made skin creams; most of the products are those that would only be purchased in some sort of import store or ethnic market. Frustrated with lackluster results from domestic products, consumers often turn to exotic imports hoping to achieve a better outcome.

Creams found to be contaminated are primarily skin bleaching and anti-aging products, including Diana skin lightening formula, Stillman’s skin bleach cream and a number of other products labeled in Hindi, Chinese and other foreign languages. If you’ve been using an imported skin lightening cream, particularly from India, China or Mexico, check the label for mercury, sometimes listed as mercurous chloride, mercuric, mercurio or calomel.

If the product doesn’t list ingredients, definitely do not use it! Mercury is highly toxic and even the smallest amounts can cause serious kidney damage among other dangerous effects. Symptoms of mercury poisoning include memory loss, tremors, irritability and hearing or vision problems. Creams containing mercury have turned up in at least seven states and a number of cases of mercury poisoning have been reported.

A safer and more effective way to treat age spots and skin discolorations is through photofacial laser treatments, which not only address sun damage, age spots and freckles, but also treat rosacea and wrinkles using high intensity pulses of broadband light to target superficial skin pigmentation. These treatments are offered by many dermatologists, cosmetic surgery centers and medical spas.

Mercury can also be found in mascara in the form of thimerosal, a preservative derived from mercury that has been implicated in conjunctivitis infections.

How Much Lead in Lipsticks is Considered Unsafe?
Not limited to skin creams, dangerous heavy metals have also been found in cosmetics, particularly lipsticks. In two consecutive FDA investigations, 100% of lipsticks tested were found to contain varying amounts of lead; up to 7.19 ppm. These were not foreign imports, but well respected manufacturers including Revlon, Dior, Avon and Cover Girl. L’Oreal USA was the worst offender, producing five of the ten most contaminated brands of lipstick.

While the FDA does not set a recommended upper limit for lead in lipstick, the agency does set one for lead in candy at 0.1 ppm; maintaining that lipstick is intended for topical use with only limited absorption. Advocates such as the Campaign for Safe Cosmetics, however, insist that there is no safe limit for lead, and lipstick manufacturers should be held accountable to remove it from their products.

Other Dangerous Chemicals Found in Makeup
Makeup and personal care products are not specifically regulated by the FDA since they are not considered to be orally ingested. Dangerous chemicals and toxins can still be absorbed, however, through the pores, tear ducts, and mucous membranes. Some other ingredients to watch out for are BHA and BHT, coal tar dyes used in hair color products and listed as p-phenylenediamine or by a 5-digit Color Index (CI) number, MEA, TEA, parabens, petrolatum, sodium laureth sulfate and ingredients ending in -siloxane or -methicone.

Many of these ingredients have been declared to be carcinogenic and all have been found to be toxic to humans to varying extents, as well as hazardous to fish and wildlife. The safest products to use are pure mineral-based makeup, and lotions made with hemp oil, an extremely nutritious oil rich in anti-oxidants, carotene, protein, calcium, magnesium, potassium, iron, zinc, phosphorus and vitamins A, B-1, B-2, B-3, B-6, C, D, and E.

Addendum:
I was unaware of this but an online search also turned up multiple exposes on fake cosmetics sold on Amazon, Ebay etc that contain lead, copper, mercury, arsenic, cadmium, pesticides, paint stripper and nail varnish remover all of which are toxic or poisonous. The fakes are packaged exactly like the originals. Buyers think they are getting the original product at half the price. 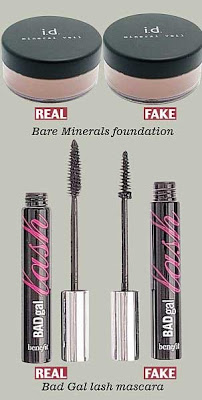 Can you tell the difference between the real and the fake?