A Google search on “home laser” yielded 154,000,000 website links overseas and 48,000,000 when searched in the US. Most of the initial listings are for hair removal devices but there are also ones for treating acne and for facial rejuvenation and others treat skin conditions like psoriasis, vitiligo and dermatitis. Many of these home laser and light or ultrasonic devices can be purchased on the Internet. Sellers tout the benefits of these products in treating acne, age spots, large pores, wrinkles, sagging skin, puffy eyes, rosacea, cold sores, and many other skin conditions. However, few of the devices have been studied or approved by the Food and Drug Administration. Some of them sound sort of scary and could be a waste of money or at worst harmful. Sales of home cosmetic devices totaled $500 million last year, and are expected to nearly double to $950 million in 2015. Women have been removing hair from their legs for quite some time. Now it is a multibillion dollar per year industry.

These new home devices tend to fall into four categories:

Hair Removal Devices
To be effective, energy in the form of heat must be absorbed by the hair shaft, penetrate deep enough to affect the follicle or root of the hair, and be administered quickly enough to stop transference of the heat to skin surrounding the hair follicle and shaft. Since hair grows in cycles and is most sensitive to treatments during the active growth cycle, it takes several laser treatments to remove hair for good. All of the devices work best and are safest on dark hair in the presence of light skin color.

One of the first home laser devices to be studied was the Tria diode laser. 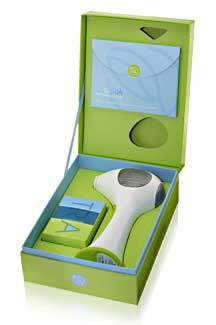 Studies showed average hair reductions of 60% at 1 month, 41% at 6 months, and 33% at 12 months after three home treatments in 77 appropriate users (Lasers Surg. Med. 2007;39:476-93). In another study 86 percent of patients experienced more than 30 percent hair reduction, and 38 percent had more than 80 percent hair reduction at one year after the last of 8 monthly treatments. Hair removal was complete for 31 percent, and of those who experienced regrowth, 69 percent reported that the hair was finer and lighter than before treatment. A skin color sensor blocks the device on darker skin colors otherwise these individuals will form skin blisters. The FDA approved the device for off-face use; it costs approximately $395.

The Silk’n SensEpil by Sephora uses intense pulsed light at low energy and short pulse durations. It also has a built-in Skin Color Sensor that locks the device on darker skin tones.

The No! No! Hair device uses patented Thermicon technology employing a thermal filament to deliver heat to the hair shaft without a light so they claim it is safe for all skin and hair colors.

It is the most heavily advertised hair removal device at least on late night television. In a study of 12 patients, twice-weekly treatment for 6 weeks with the low-energy device removed 44% of hair on the legs and 15% of hair in the bikini area at the 12-week follow-up (J. Drugs Dermatol. 2007;6:788-92).

In another study of 23 patients (7 men, 16 women) aged 18-55 years two sites on one leg of each patient were shaved 4 days before baseline, and then were treated every 3-4 days with the No! No! device on one site on the leg and by shaving the other site for 8 weeks. There was no significant difference between the 2 areas in terms of number of active hair follicles, hair regrowth, thickness or color after 1 month. That is to say singing the hair away with the device was no different than shaving it off. The No! No! device is basically an expensive razor.

Devices to Treat Acne
Eight studies since 1999 have shown that doctors’ office treatments with blue light are effective in eliminating Propionibacterium acnes bacteria the causative agent of acne. Just clearing the bacteria isn’t enough a lot of the time because the bacteria produce irritating proteins that can be left behind so additional medical treatment with prescription or over the counter medications is frequently required. The Tria system comes with washes and topical creams, or patients can use the device with whatever prescription regimen they are on.

Four home devices now offer self-application of this blue light. The power density of the various devices makes a difference. Lower power density requires twice-weekly, 20-minute applications on each side of the face, which can be difficult for patients to do. Higher-density blue light devices, such as the Tria skin clarifying system, require less than 3 minutes twice a day. 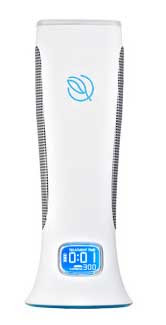 Studies have showed 70% clearance of treated areas within 2 weeks. A company-sponsored study of the Tria device in 33 adults showed significant reductions in inflammatory acne lesions after 3 weeks of treatments (J. Drugs Dermatol. 2011;6:596-602). The device’s blue light cartridge has to be replaced about every 2 months. The FDA approved the device for the treatment of acne, it costs approximately $245.

The No! No! Skin uses heat generated by light to treat acne. A green light releases oxygen from porphyrins produced by the bacteria to kill the bacteria. A red light diminishes pain and swelling.

The Claro home device by Sephora 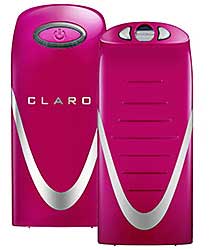 combines heat and intense pulsed light:
-Blue Light (400-430nm): stimulates the production of oxygen, which attacks the bacteria that causes acne
– Red Light (600nm): combines with heat to soothe the inflammation, redness and soreness of each pimple while accelerating the healing process
– Infra-Red Energy (700nm): creates heat that helps to kill the acne bacteria while increasing the effectiveness of blue light
It costs approximately $195 and comes in 3 colors – red, black and blue. 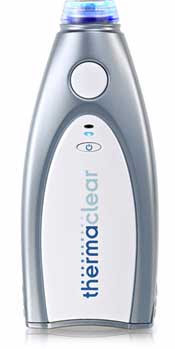 It’s FDA cleared and advertised as safe and effective on all skin types and tones.

Zeno uses the combination of a topical medication containing 1% salicylic acid and skin moisturizer followed by the application of a small vibrating heat generating hand held device to treat acne. 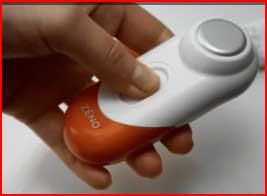 At $40 it may be the cheapest device available. 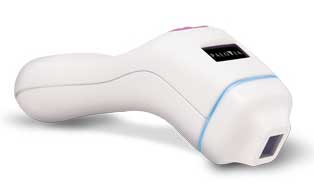 There are two phases to the wrinkle treatment plan – the Initial Phase of one treatment per day for 30 days and the Maintenance Phase of one treatment 2 times per week. It costs about $500. A blinded study of 34 subjects presented at the 2010 meeting of the American Society for Laser Medicine and Surgery reported a 1-point improvement on the 9-point Fitzpatrick wrinkle scale in 90% of patients after 4 weeks of daily use and in 79% after 4 weeks of twice-weekly maintenance treatments.

The Levia UVB device (Lerner Medical Devices) is approved for home use to treat psoriasis, vitiligo, and atopic dermatitis. 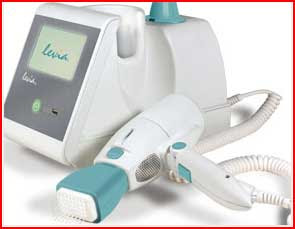 It directs concentrated ultraviolet B (UVB) light, which has a long history in treating psoriasis, to psoriasis plaques. The treatments require a prescription and programming of the device. Multiple studies have shown that home UVB therapy is as effective as office treatments.

I have not covered the scarier sounding devices in this blog. In conclusion I think we will see doctors doing laser hair removal as a thing of the past. It makes we wonder if the home laser tattoo removal kit is just around the corner.

Added March 4, 2013:
Late last month Syneron Beauty Inc introduced a home hair removal device called Mē smooth that combines intense
pulsed light and radio frequency energy for hair removal. The intense pulsed light heats up the hair follicle and the radio frequency then kills it. Since it is not laser based its effect is independent of hair color, it should work as well on white or blond hair as black hair and should have less adverse effects on darker skin types than laser based hair removal. Laser based hair removal systems work best on dark hair. It is quick and reportedly can treat 2 legs in 10minutes. It is FDA approved for use on the body (armpits, arms, legs, bikini line and back). The company will soon introduce an adaptor for facial applications. The device is used once a week for 7 weeks, but touch-ups may be needed down
the road. In clinical trials, the mē smooth achieved up to 96% hair
reduction 3 months after the last treatment. It will retail for $395 and
is preloaded with 6,000 pulses. Replacement cartridges cost $50, and
enable users to share the product with friends and family members). 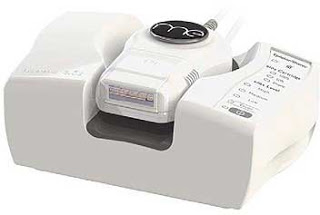 Beginning May 2013 it will be available at Nordstrom, Neiman Marcus, Bloomingdales, Ulta, Sephora, and Space NK, as well as on QVC and mePower.com.

February 28, 2014 Addendum:
The IlluMask, which looks like a hockey mask, promises to rejuvenate aging skin, improve the appearance of fine lines and wrinkles, improve quality and tone of the skin, and increase skin elasticity and hydration using LED lights. Each mask is good for only 30 daily treatments, each lasting 15 minutes. When all 30 treatments are finished, the mask is discarded. It is selling briskly at big retailers like Walmart and Target since its introduction earlier this month. At $30 each it seems a cheaper option than those listed above as that is $360 per year vs. $500 for the PaloVia. Be forewarned that the device has not been peer reviewed for efficacy. 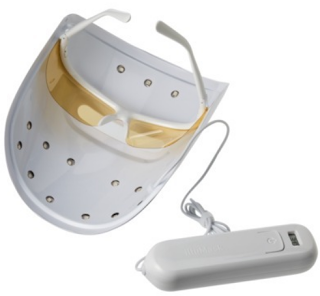 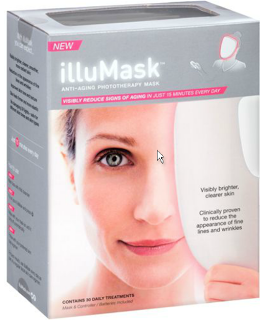 They have a second mask, which combats acne with blue and red. That mask is FDA approved to treat acne but the Anti-aging LED light mask does not require clearance from the F.D.A. for beauty claims.